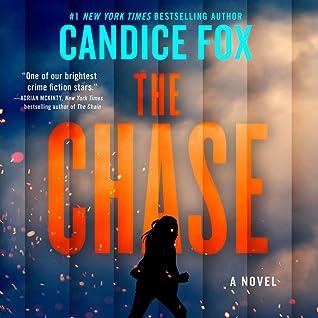 
The Chase is a modern The Fugitive with characters only number-one New York Times and Globe and Mail best-selling author Candice Fox can write.
“Are you listening, Warden?”
“What do you want?”
“I want you to let them out.”
“Which inmates are we talking about?”
“All of them.”
When 650 of the world’s most violent human beings pour out of the Pronghorn Correctional Facility into the Nevada Desert, the biggest manhunt in US history begins.
For John Kradle, this is his chance to prove his innocence, 26 years after the murder of his wife and child. He just needs to stay one step ahead of the law enforcement officers he knows will be chasing down the escapees.
Death Row Supervisor turned fugitive-hunter Celine Osbourne is single-minded in her mission to catch Kradle. She has very personal reasons for hating him - and she knows exactly where he’s heading....
A Macmillan Audio production from Forge Books


Review:
A threat to civilians has the warden of the Pronghorn Correctional Facility facing a terrible decision. Before she can take action, the facility staff move on their own to open up the cell blocks and release every prisoner into the Nevada Desert.

John Kradle, released from death row, sees this as his last chance to prove that he did not murder his wife and child 26 years ago. He has had plenty of time to plan what he would do if he had the chance to escape. He sets out in a different direction from most of the prisoners. Unfortunately, another brutish prisoner decides to tag along with John, nearly killing him before the man realizes that he needs John’s plan for a chance to escape recapture.

Celine Osbourne is a Death Row Supervisor who prides herself on knowing the crimes and natures of her row of inmates. She has developed a hate-on-hate relationship with many of them over the years. Her past personal trauma has caused her to have truly negative attitude towards Kradle. Celine joins the fiercely determined US Marshall, Trinity, in the chase for the worst of the criminals. Trinity is focused on those she believes could have planned the breakout – most likely the terrorists or the mass murderers. But Celine is focused on getting Kradle and she is sure she knows where he is heading.

Celine finds herself teaming up with a former inmate, Keeps, who was released the day of the breakout. Keeps has the ability to think like a criminal and provide a distinct perspective that helps track the inmates that Trinity and Celine are focusing on. He acknowledges his skills come from his past as a conman, but Celine thinks perhaps she can trust him.

I found the primary characters interesting and was intrigued by the different thought processes that come from the law officer versus the criminal mind perspectives. There is action and violence that is ugly but to be expected from violent prisoners. I did like the several twists that make the story move along well. The story set out with action and continued through to the end. I would like to read more by this author, and I recommend this to those who like a good crime thriller.

Audio Notes: David de Vries and Lisa Negron do a good job narrating the male and female voices. They provide fitting accents and inflection for the several characters. I really enjoyed the audio performance.