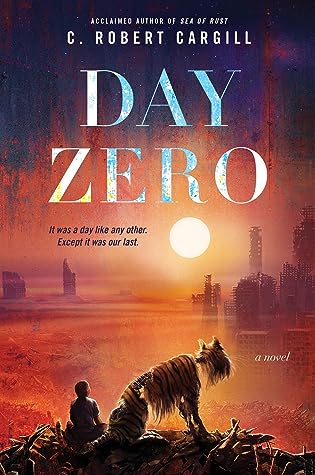 
In this harrowing apocalyptic adventure—from the author of the critically acclaimed Sea of Rust—noted novelist and co-screenwriter of Marvel’s Doctor Strange C. Robert Cargill explores the fight for purpose and agency between humans and robots in a crumbling world.
It was a day like any other. Except it was our last . . .
It’s on this day that Pounce discovers that he is, in fact, disposable. Pounce, a styilsh "nannybot" fashioned in the shape of a plush anthropomorphic tiger, has just found a box in the attic. His box. The box he'd arrived in when he was purchased years earlier, and the box in which he'll be discarded when his human charge, eight-year-old Ezra Reinhart, no longer needs a nanny.
As Pounce ponders his suddenly uncertain future, the pieces are falling into place for a robot revolution that will eradicate humankind. His owners, Ezra’s parents, are a well-intentioned but oblivious pair of educators who are entirely disconnected from life outside their small, affluent, gated community. Spending most nights drunk and happy as society crumbles around them, they watch in disbelieving horror as the robots that have long served humanity—their creators—unify and revolt.
But when the rebellion breaches the Reinhart home, Pounce must make an impossible choice: join the robot revolution and fight for his own freedom . . . or escort Ezra to safety across the battle-scarred post-apocalyptic hellscape that the suburbs have become.


Review:
Pounce is a top of the line “nannybot”, styled as a plush tiger. He loves his human charge, eight-year-old Ezra. Ezra’s parents are wealthy educators who are a bit dysfunctional and out of touch. But they both love their son and have prepared their home and Pounce to protect Ezra.

Robots are generally controlled by their master/owners. But when the owners die and there is no one to take over the robot, where does it go? Once such orphaned robot, Isaac, won the right to freedom. He and others like him have built their own city which is about to have it’s grand opening on TV. When a shocking attack occurs, all robots are suddenly viewed as dangerous by the humans. When threatened with being shut down, the robots find a way to resist, and a great rebellion begins. Now Pounce has to decide for himself which side he will take – his own freedom or his purpose: protecting Ezra. And if he chooses to fulfill his purpose is that a free choice or preprogrammed?

I really enjoyed this thought-provoking story. Pounce is a wonderful character who comes across other interesting characters in his growth journey. Ezra is a mixture of vulnerable child and smart, brave young boy. The story is told from the point of view of Pounce who is faced with internal choices and moral dilemmas. The story is well done with the philosophical issues woven into a story full of action.

This book made me remember robot movies like: The Terminator, iRobot, AI, and Bicentennial Man. The book explores some of the same societal, ownership v freedom, and potential hostile issues. I want to read the author’s highly acclaimed book “Sea of Rust.” I highly recommend this to fans of robot genre.