It's not gripping but it is an interesting listen, suitable for younger readers. 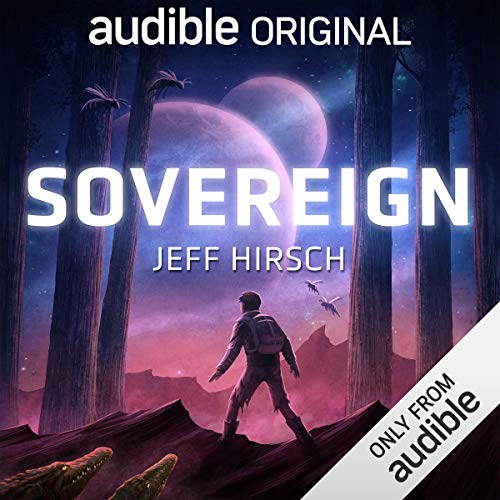 
Jeff Hirsch, the mastermind behind such dark YA dystopias as The Eleventh Plague and The Darkest Hour, goes interstellar with Sovereign, a middle grade Audible Original voiced by Jesse Einstein, who listeners have called "first-rate."

Micah Cole has been in deep space for four years now. While his parents chase their obsession with finding intelligent life deeper and deeper into the universe, Micah can’t help but dream of the friends he’s left behind and counts the days until the family returns to Earth. When a devastating meteor shower nearly destroys the Coles’s ship, Micah is separated from his family and stranded alone on Sovereign—a vast planet of raging rivers and towering forests. If Micah ever wants to see his family or his home again, he’ll have to learn how to survive on this hostile alien world. Armed with only his wits and determination, he’ll have to battle the elements, his own deepest fears, and a strange presence that might just hold the key to his parents’ obsession—and be his ticket back home.
©2019 Jeff Hirsch (P)2019 Audible Originals, LLC.

Review:
Micah is a young teen who has been ‘dragged’ off to space exploration with his parents. He misses his friends from middle school and often dreams of getting back to them. His parents are set on their obsession of finding intelligent life beyond earth. They have found at least one unique species but continue to push on to the next planet.

A meteor storm forces Micah’s parents to send him off in a lifeboat to a nearby planet that they probed and found suitable for life. He is stranded on Sovereign hoping his parents will be able to make quick repairs and return for him. In the first few days, Micah’s lifeboat is caught in a flash flood while he is outside. Now he has to struggle for shelter and supplies on an alien world with unknown elements. Micah knows he can send a distress call if he can reach the probe his parents sent before the storm. But he will have to travel over rivers and forests to get to the high mountain. As the days pass, he survives hostile attacks and is imagines his best friend from childhood is exhorting him to get up and keep going. Is Micah’s friend a memory or a strange presence helping him to survive?

I had to remember that Micah was just an impulsive teen when he made so many unwise choices that get him into trouble. Fortunately, luck is with him and then an unexpected friend. I appreciated the creative world building of the planet and creatures – friendly and dangerous. There is also a bit of a nice message as the story moves toward its conclusion. I found this to be entertaining for a quick read/listen. I recommend it for younger readers or those who might want to spend six or so hours that don’t require intense attention.

Audio Notes: Jesse Einstein does a good job with the narration. He captures the youth and immaturity of Micah as well as the energy of the story. For me, the narration helped the story move along.