This is a well-paced post apocalyptic series full of interesting characters.
After It Happened
Publisher's Pack 2
By: Devon C. Ford
Narrated by: R.C. Bray 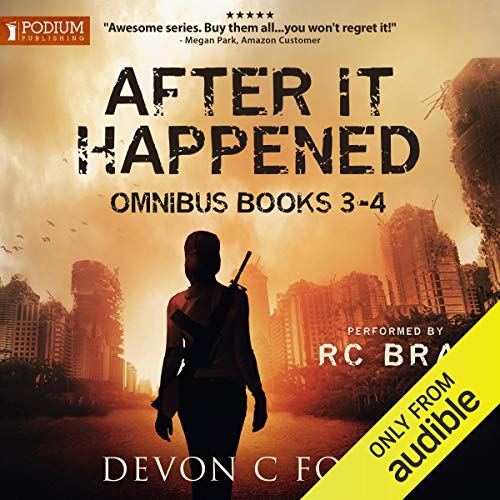 
Publisher's Summary
This publisher's pack contains Society (book three) and Hope (book four) of the After It Happened series.
Society, book three:
Set in the UK in the immediate aftermath of a mysterious illness which swept the country and left millions dead, the series follows the trials facing a reluctant hero, Dan, and the group he forms around him. They must battle the elements, find sufficient supplies and equipment to survive, and protect themselves against the most destructive force on the planet: other people.
The survivors have prospered, but their home is an enticing prospect for others to take. Besieged, they must respond with a savagery to dissuade further attempts.
Is this the end of society?
Hope, book four:
In the aftermath of the shocking revelations about the propagation of the human race, Dan latches on to a desperate chance to change the future which many have accepted. The group splits and Dan leads his closest allies on an uncertain journey to find a solution. They find themselves battling against the elements, against new foes, and above all, against time.
They must succeed.
They must have hope.
©2017 Devon C. Ford (P)2017 Podium Publishing

Review:
Dan is the ‘military’ leader of his community of 70+ or so plague survivors who are thriving at a former prison facility. Each member finds or is assigned a task where he or she can contribute. There are those working as farmers and in animal husbandry. Some are mechanics helping to maintain and improve equipment. Others are cooks, housekeepers, and medical staff. The whole compound is protected by the “Rangers” under Dan’s guidance. He also heads the teams of scavengers who go out to gather more supplies.

The community has been successful by working together, keeping their location quiet, and seeking other wanderers while being cautious who they allow to become part of the ‘family’. When outsiders threaten their home, Dan is quick to gather his protégé, 13-year-old Leah, and other Rangers to eliminate the threats.

Dan, his dog Ash, Lexi, and Leah rescue a woman who was being followed on the highway. Emma is frightened but finally reveals that she is a scientist researching the scientific beginnings of the plague. She is trying to find a common connection for those who have survived. Steve, a former pilot, agrees to take Emma north to a specialized Scotland research lab. Along the way they are brought into a military compound and assigned an “escort”, Mitch. Through various events, Steve creates an enemy and Mitch  joins him returning 'home'.

Dan and Emma realize the common connection (which is a surprise) of survivors. Then they have a particular, special, reason to travel to Africa seeking a remedy. A significant group of the community decide to travel with Dan, seeking 'hope', but leaving the home community resentful and vulnerable.

I liked how this book picked up right where book 2 ended. There is not a lot of back story but there is deeper development of several of the characters, Dan being the most significant. I enjoyed being caught up in the dangers and trauma of the characters who end up divided into two groups. I recommend reading the series from the beginning and I look forward to the next bundle.

Audio Notes: R.C. Bray does a clear, emotionally fitting narration of these two stories. His presentation helps pull me into story. I will continue to listen to the series.