This is a quick story that definitely brings to mind an old time computer game.

Quest for the Diamond Sword
A Minecraft Gamer's Adventure
By: Winter Morgan
Narrated by: Luke Daniels 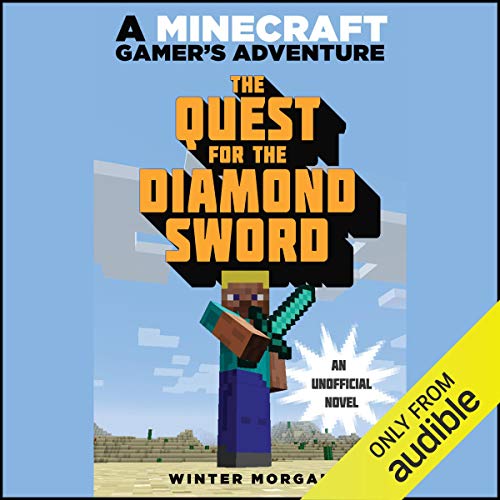 Publisher's Summary
Steve lives on a wheat farm. He has everything he needs to live in the Minecraft world: a bed, a house, and food. Steve likes to spend his mornings in the NCP village and trade his wheat for emeralds, armor, books, swords, and food. One morning, he finds that Zombies have attacked the villagers. The Zombies have also turned the village blacksmith into a Zombie, leaving Steve without a place to get swords. To protect himself and the few villagers that remain, Steve goes on a quest to mine for 40 diamonds, which are the most powerful mineral in the Overworld. He wants to craft these diamonds into a diamond sword to shield him and the villagers from the Zombies.
Far from his home, with night about to set in, Steve fears for his life. Nighttime is when users are most vulnerable in Minecraft. As he looks for shelter in a temple, he meets a trio of treasure hunters, Max, Lucy, and Henry, who are trying to unearth the treasure under the temple. Steve tells them of his master plan to mine for the most powerful mineral in the Overworld - the diamond. The treasure hunters are eager to join him. Facing treacherous mining conditions, a thunderstorm, and attacks from hostile mobs, these four friends question if it's better to be a single player than a multiplayer, as they try to watch out for each other and chase Steve's dream at the same time. Will Steve find the diamonds? Will his friends help or hinder the search? Should he trust his new treasure hunter friends? And will Steve get back in time to save the villagers?
©2014 Hollan Publishing, Inc. (P)2014 Audible Inc.


Review:
Steve is a wheat farmer living comfortably in a Minecraft world. He is a calm, compassionate neighbor who helps the nearby villagers by crafting objects, such as an iron golem, to help protect them from the outside monsters, particularly the Zombies. One morning he hears screams and learns that his protective construct has fallen and Zombies have taken over the village. They have even turned his good friend, the blacksmith with whom he trades for iron and jewels, into a Zombie.

Steve sets off to the Nether world on a quest to find diamonds to craft a diamond sword to fight off the Zombies and restore his friend. While seeking shelter in a temple, Steve meets three people, Max, Lucy, and Henry. Steve is concerned they might be Griefers (thieves), but they convince him they are treasure hunters. The four decide to team together to help face the dangers and search for the diamonds. Will they be successful in the quest, and can Steve save his village?

I had to chuckle shortly into this audio when I realized it is truly an audio version of the Minecraft computer games. The cubist characters use their cubist resources to mine jewels and “craft” tools and portals while on a quest to save others. The action and story are pretty simplistic. I do like the simplistic moral lessons that are shared through the interactions with other characters. I don’t plan to rush on to listen to books 2-6 in the series, all similarly short and narrated by Luke Daniels which is a plus. This is apparently set out to be chapter books for young readers and I think the audio could be a good listen for families on short trips or for Minecraft fans.

Audio Notes: Luke Daniels is a good narrator whose narration on this helped me push through to the end. Luke’s characters voices and energy definitely added to the story for me.