Book Review: The Faith of Condoleezza Rice by Leslie Montgomery

This biography shares wonderful information about this remarkable woman and about the Civil Rights Movement.

The Faith of Condoleezza Rice
by Leslie Montgomery 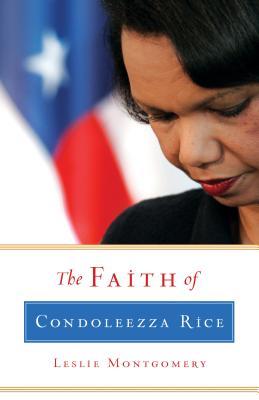 This is not a book about politics. It is a book about a little black girl who was born into a Christian home in the racially explosive town of Birmingham, Alabama, during the throes of the Civil Rights Movement. It’s about two parents who quietly defied discrimination, stood against injustice, clung to their faith, and raised their child to follow the Lord they themselves served. They believed wholeheartedly that she was a gift from God born for such a time as this and that he had a special plan and a purpose for her life—a plan for good, and not for evil, a plan to give her a hope and a future—all this despite what the world shouted at them through hatred and prejudice that hovered over them mercilessly.
Condoleezza Rice has built her life and career on defied expectations. She defied the shortsighted guidance counselor who advised her parents that their daughter wasn’t college material by earning not only a Bachelor’s Degree, but then a Master’s and a Ph.D. She took on roles that a black female had never held before—provost at Stanford University, National Security Advisor, and Secretary of State—and performed these roles skillfully. Once you read her story, you will recognize that even more than her vast intellectual capacity, ambition, and strong work ethic, it has been God’s leading in her life—and her willingness to follow his call—that has allowed her to come so far. In Condoleezza Rice we have a true spiritual hero.
She’s been called the devil’s handmaiden, a history-maker, a rock star, Bush’s secret weapon, the most influential woman in the world, a rising star, and a race traitor—among other things. Regardless of which opinion people come to about who she is or what label they’ve placed on her character, everyone knows there’s something uniquely different about the 5′7″ African-American woman who currently serves as our Secretary of State.
Condoleezza Rice has a mysterious stability, an enigmatic air, and an inexplicable confidence that is devoid of pride—a trait that is hard to find in the world, let alone in the slick world of politics. Her impenetrable strength and unshakable temperament are evidence of three defining characteristics—a faith that runs deep in her heritage, a personal passion for God, and moral convictions that stem from both.
No matter what your faith, to know and appreciate the character of Condoleezza Rice, you must learn about hers. To understand her passion for peace, you must become personally familiar with the chaotic state of the nation in which she was born. To fully grasp her heart and what has motivated her to far exceed the limited expectations that enslaved both her race and her gender for generations before her, you must examine her roots. To taste the inspiration for democracy that flows like a river from her heart, you must learn what it is that feeds her soul. The Faith of Condoleezza Rice reveals all of this and more.


Review:
I was not overly familiar with Condoleezza Rice but I was drawn to this title due to a) the emphasis on her faith and b) her success in politics after coming through the throes of the Civil Right years. The author does a beautiful job of giving a personal view of Condoleezza’s (Condi’s) life. This cover’s Condi’s birth in the early 1950s and her childhood growing up living on the edge of the tumultuous events of Birmingham as the Civil Rights Movement struggled to change attitudes throughout America.

The book actually starts before birth because it describes the lives and difficult years that her grandparents came through. Their steadfast faith, persevering through segregated racism in the South, deeply influenced Condi. Condi’s parents sheltered her from direct contact with the worst of community racial mistreatment. They explained the events to her in a way that precluded bitterness, letting her know that her color and family status in no way limited her opportunities. They stressed that faith in a loving and faithful God and the pursuit of education were paramount for success.

Condi is clearly a brilliant and diligent woman. From a young child she disciplined herself in all her endeavors, including practicing piano, studying hard, and learning Russian. As an adult she applied her skills in collegiate and political settings. The author makes a point that Condi’s success stems from her faith and positive attitude. I really like Condi’s attitude that “The first responsibility of the educated person is to be optimistic.” She also learned that strength comes through struggles and loss, as “it is through struggle that we find redemption and self-knowledge.” Her reliance upon God at a time of loss helped her to experience ‘the peace that surpasses all understanding.’

The author notes that Condi became a Republican because the party’s principles were consistent with her own. The book touches on her years in civil service and the many offers she received to seek positions as a Senator or Governor. But Condi didn’t want to run for office and repeatedly excelled in the field of education, being the youngest Provost at Stanford University in 1993. Condi had a staunch belief in liberty as God’s gift to humanity and that America leads the fight for liberation. Perhaps this belief, in addition to her previous work with President George W. Bush, influenced her decision to accept the position as Secretary of State in 2005, a few years after the terrorist attacks in 2001.

The blurb appropriately states that this “is not a book about politics.” It is a book that shares details of racial struggles and the faith that sustains Condoleezza in all aspects of her life. I have to say that I was appalled at descriptions of racial assaults during the Civil Rights years but even against Condi when she was Secretary of State! I enjoyed learning about this remarkable woman and especially enjoyed the positive theme and emphasis on faith. I recommend this as a worthwhile and inspirational memoir.


Source: February 2018 Discounted price at Christianbooks.com. This qualifies for 2021TBR and 2021 Print goals. This was a book shared with my Ladies Book Club.
Posted by Martha Eskuchen at 11:48 PM