I liked this series that focuses on one man's survival and ‘battles’ with the enemy.
The Traveler Series
A Post-Apocalyptic/Dystopian Adventure: Books 1-3
By: Tom Abrahams
Narrated by: Kevin Pierce 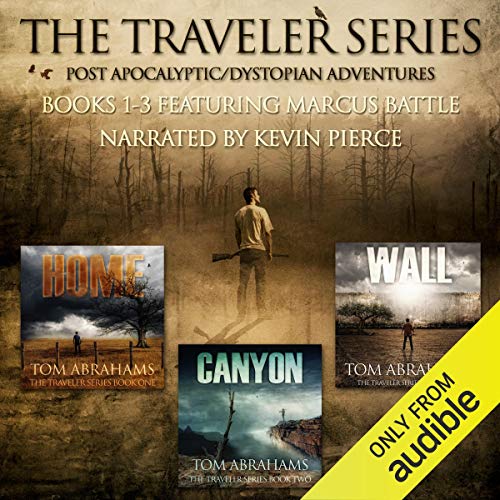 Publisher's Summary
The first three books in the Traveler series in one bundle!
Book One: Home
He thought he was prepared. He thought his family was safe. He was wrong.
Five years after a pneumonic plague killed two-thirds of the world’s population, army veteran Marcus Battle is isolated. He’s alone with his guns, his food, and the graves of his wife and child.
Unaware of the chaos that’s befallen everything outside of his central Texas ranch land, Marcus lives a Spartan life. If anyone steps onto his property he shoots first and never ask questions.
But when a woman in distress, chased by marauders, seeks asylum, Marcus has a decision to make.
Does he throw her to the wolves to protect himself, or does he help her and leave the shelter and protection of home?
Book Two: Canyon
He’s homeless. He’s on the run. and he wants revenge.
Marcus Battle has left behind his home.
Now he’s on a seemingly impossible mission to find a missing child. But can he balance that responsibility with his deep, primal desire to exact revenge on the men who destroyed his solitary existence?
The world he discovers on his journey isn’t the one he remembers before a pneumonic plague called the Scourge killed two-thirds of the world’s population. It is lawless, depraved, and far deadlier than the disease which created it.
Battle made a promise to find that child. It’s a promise he regrets more acutely with every step of the journey where he is as much the hunter as he is the hunted.
Book Three: Wall
He survived the scourge. He escaped the cartel. Now he faces the wall.
In the chaos of a global plague, evil took hold. Governments fell, the good became servants, and the Cartel rose to power.
A wall was built to contain the wasteland and keep the evil at bay. Now an organized resistance wants change. They're willing to fight for it and they've asked Marcus Battle to help.
The last thing Battle wants is another war. But if that's what it takes to gain freedom and safe passage to the other side of the wall, he'll take aim and fire.
©2019 Piton Press LLC (P)2019 Piton Press LLC

Review:
Marcus Battle, a retired army vet, thought he had prepared to protect his family. But he couldn’t save his wife and young son when the plague (the scourge) swept across the world and came to his door. Marcus has survived five years alone on his isolated ranch with his hoarded supplies of food and guns, his fences and special protections, and the ghosts of his family.

Then the outside world intrudes on his solitude. An apparently abused and frightened woman, Lola, works her way into his property but with her comes trouble. He eliminates most of the threats but one man escapes to go back to his cartel boss to reveal that a man is living outside the control of the bosses. Not only do they want to retrieve their property, Lola, they are targeting Marcus. They just have no clue what a Battle they will face. (Sorry – the name reference is just too hard to resist.)

This is a bundle of the first three books in the series. Home introduces Marcus and tells about his Home. Canyon follows Marcus as he and Lola escape to join a rebellion group, the Dwellers, living in the mountains. The third book, Wall, shares how Marcus helps in the fight between the Cartel and the Dwellers. Then Marcus and a few friends are escorted to the Wall to hopefully find a new start in the world to the north. I liked reading the first three books together.

The author does a good job blending personal issues with danger and violence. Abrahams uses alternating present events with flash back chapters to fill in the history, both of Battle at home with his family and Battle saving another soldier in Syria. I liked Marcus Battle’s character with his firmness and emotional struggles to reconnect with other people. His character pretty much overshadows everyone else although we do get to learn some of the history of a handful of the bad men. The story is sadly plausible in the aspect that a Cartel system could take over if government forces pull out.

I recently read a spin off story, Unprepared, The Scourge, about the beginning of the plague.. I think this series is a little stronger for entertainment. I do plan to continue with the next bundle, books 4 through 6. I recommend this to fans of post-apocalyptic, dystopian with lots of fight action.

Audio Notes: Kevin Pierce does his usual excellent job of narration. He provides distinct voices and fitting energy and emotion. The narration added to my enjoyment of the story.