Audio Book Review: An Enemy of the People by Henrik Ibsen

I was impressed by this story that sets environment concerns against financial gain.

An Enemy of the People
by Henrik Ibsen
Adapted by Rebecca Lenkiewicz, performed by Richard Kind, Rosalind Ayres, Gregory Harrison, Josh Stamberg, and a full cast 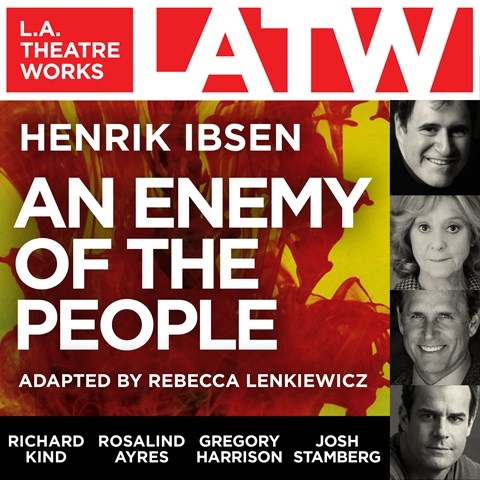 L.A. Theatre Works' "radio theater" production of Ibsen's classic play about environmental contamination, science, dissent, and hypocrisy offers a well-rounded audio theater experience. Very little in Ibsen's original work requires theatrical action, and, when it does, the LATW cast--including Richard Kind, Rosalind Ayres, Gregory Harrison, and Josh Stamberg--and the production team do an excellent job of conveying it through sound. Like most dramatic works, the two-hour play is best enjoyed in one or two sittings. Ibsen's themes remain relevant, almost prescient, nearly a century and a half after he wrote this play. F.C. © AudioFile 2014, Portland, Maine [Published: AUGUST 2014]


Review:
Dr. Stockmann learns that the baths in his coastal Norway town are infected with a deadly disease. He is concerned for the people and visitors and wants the town to repair or close the baths. The Mayor, who is Dr. Stockmann's brother, doesn’e want to spend the large costs involved nor close the baths because of the financial losses it would cause the town.

The local newspaper is set to publish the contamination report until the Mayor steps in and convinces the editor that the financial welfare of the town’s people is more important than the risk of the disease. When the doctor tries to have an open town meeting, once again the Mayor intervenes, maligns his brother, and declares him to be an enemy of the people! Will Dr. Stockmann be run out of town or will he stay and fight to save his home and the people?

Doesn’t this sound like it could be set in society today? This was written in 1882 and addresses social conflicts between environment, health and financial gain. It also points out the power and hypocrisy of the political leaders and press (still evident today). I found it fascinating and recommend it as a true political classic.

Audio Notes: The L.A. Theatre Works presentation is wonderfully done, bringing the drama to life. It makes for an entertaining listen.