This is full of interesting alien and human challenges. It is first in a spin off series, not the first with the characters.
The Kasari Nexus: Rho Agenda Assimilation, Book 1
by: Richard Phillips
Narrated by: Alexander Cendese 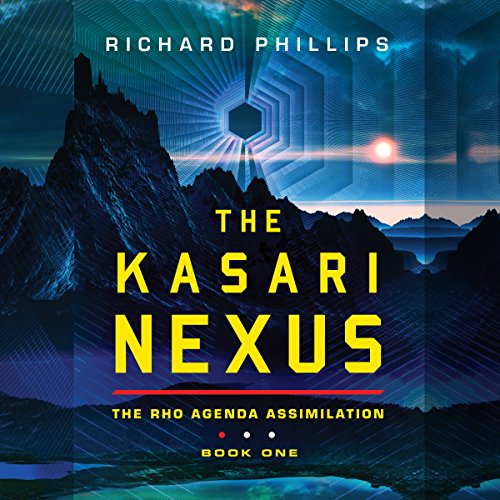 
Publisher's Summary
Jennifer Smythe escapes Earth's invasion by the insidious Kasari race, hijacks an alien starship, and survives the deadly passage through a wormhole. But escape is short-lived....
When Jennifer emerges on the new world of Scion, she is confronted by the same deadly enemy. Now the Kasari have sided with the planet's angel-like elite against the warrior underclass, but with the intent of ultimately ruling both. And when Jennifer is captured by the brutish Koranthians, her alien-enhanced abilities make her a crucial asset in battling the Kasari and their winged allies.
Back on a divided Earth, Jennifer's brother, Mark, and Jack "the Ripper" Gregory wage their own war against the Kasari. As the global government welcomes the extraterrestrials, Mark, Jack, and their rebel faction seek to use the powerful mind-altering skills gained from the Kasari's sworn enemies to repel the would-be conquerors. But faced with the might of Earth's ruling forces, has the cause already been lost?
©2016 Richard Phillips (P)2016 Brilliance Audio, Inc.

Review:
Jennifer Smythe, who is now alien enhanced, and her captain, a friend whose body has suffered through scientific treatments, are working on an alien spaceship when the captain inadvertently activates the ship and hurls them into space. The pair scramble to survive and control the ship that is apparently heading off to its home territory. Eventually they land on a planet to resupply. Initially all seems optimistic but then Jennifer is captured by enemy forces. The Koranthian warlord begins to admire his prisoner as Jennifer uses her alien-enhanced skills to survive and even give aid.

Meanwhile, back on earth, Jennifer’s brother, Mark, his wife Heather have received alien enhancements too. They are on the run with their friends Jack (“the Ripper”, his wife Janet and their gifted son. This group are being hunted by several groups seeking to stop their rebellion against the government which has chosen to welcome the alien beings, the Kasari. Can this team survive the multiple attacks from foes with all the resources of the government behind them?

Although this is the first in a series it becomes clear quickly that this continues characters from a prior series. This caused confusion as the book started off at a brisk pace without a lot of background to bring a new reader up to speed. It took me a while to begin to care about the characters but, ultimately, I liked them. There is a lot of alien tech and intrigue, as well as battle scenes that kept the book interesting. I think I would like to go back to the prior series before moving on with this one. I liked the writing and creativity and recommend the author and book with the caveat of it being a spin off.

Audio Notes: Alexander Cendese does a good job as the narrator. He provides strong voices for the characters that added to the entertainment value of the story. I am glad that I listened to this.