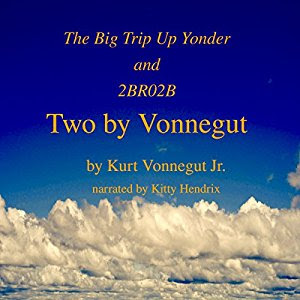 Publisher's Summary
Kurt Vonnegut Jr. (1922-2007) was a prolific and genre-bending American novelist known for works blending satire, black comedy, and science fiction, such as Slaughterhouse-Five (1969), Cat's Cradle (1963), and Breakfast of Champions (1973).
These two short works, "The Big Trip Up Yonder" and "2BR02B", are science fiction tales originally published in the magazines Galaxy Science Fiction and If: Worlds of Science Fiction in 1959 and 1962.
©2016 Kurt Vonnegut (P)2016 Kitty Hendrix


Review:
These are two short sci fi stories that address aging in the future; or more accurately not aging. They reflect two different extremes which make them interesting as a pair.

The Big Trip Up Yonder tells of Gramps Ford, a 172-year-old, who is the head of his clan of children and grandchildren. They are all living together cramped into one three bedroom apartment where the head of the family gets the perk of the best bed in a private room. Gramps gets to dole out the use of the bedrooms as a reward to his favorite child, grandchild or great-grandchild of the moment, as well as changing his Will bequeathing his bed and couch anytime one heir falls out of favor. If Granps continues to take the special medicine that keeps him from aging and dying the family is stuck in this terrible routine. Everyone’s nerves are on edge and Gramps decides something has to be done. The solution is an ironic twist that I have seen so often in these vintage sci fi stories…and in the modern ones.

2BR02B is another satiric story that deals with death in a future world where government controls the population and a new child is only permitted if another person dies. I really liked the authors use of the wall mural to mirror the events that were happening.

I wouldn’t want a steady diet of these stories, but they are fun to read/listen to. I particularly like to compare the “vintage” tales of the future with the current day imaginings. Often the themes are similar and certainly the twists of irony are always present.

Audio Notes: Kitty Hendrix does an excellent job with the narration. This is not so much an issue of presenting character voices, although she does that well also. The plus is that the narration focuses on the story so the listener gets to think about the point that Vonnegut is making. I’m glad I received this audio for an honest review.


I received this audio title from the narrator in exchange for an unbiased review. This qualifies for 2017 Audiobook Challenge, 2017 TBR, Sci Fi Experience and Vintage Sci Fi.
Posted by Martha Eskuchen at 12:41 PM