This is an important vintage sci fi dystopia, said to have influenced George Orwell’s 1984.

We
Written by: Yevgeny Zamyatin
Narrated by: Grover Gardner 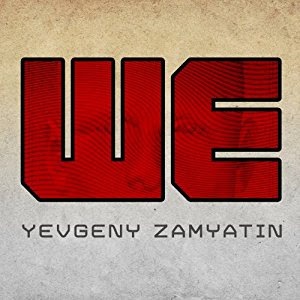 Publisher's Summary
Set in the 26th century A.D., Yevgeny Zamyatin's masterpiece describes life under the regimented totalitarian society of OneState, ruled over by the all-powerful "Benefactor." Recognized as the inspiration for George Orwell's 1984, We is the archetype of the modern dystopia, or anti-Utopia: a great prose poem detailing the fate that might befall us all if we surrender our individual selves to some collective dream of technology and fail in the vigilance that is the price of freedom. Clarence Brown's brilliant translation is based on the corrected text of the novel, first published in Russia in 1988 after more than 60 years' suppression.
Public Domain (P)2011 Tantor


Review:
D-503 is a citizen of OneState where the “Benefactor” takes care of everyone for the collective good. Everyone is provided housing, identical clothing, work, food and sexual engagement with choice of partners. Everyone is expected to be happy and satisfied with their needs taken care of within the glass city. The secret police and spies are quick to deal with anyone who tries to go beyond the Green Wall, or refuses to conform to the regulated routines.

D-503 has an important job as one of the mathematicians helping to build the Integral, the first space ship to expand the world of OneState. He deals with numbers, facts and logic. He is not a poet but he is intent on journaling his thoughts as a record to share with the future even as he records the steps of his 'madness'.

One day D-503 and his usual female partner are walking during personal time, the time when the masses walk along the prescribed route. D-503 becomes aware of another couple walking beside him. He is immediately smitten by I-330, a woman who defies the rules and invites him to meet her a few days hence. She leads him on a walk at an unscheduled time to a strange house off the usual paths and then proceeds to captivate his thoughts and energies.

D-503 shares his jumbled emotions and fears as I-330 leads him into rebellion and a conspiracy to take down OneState. He struggles with his logical training to obey the regulations and his inner yearning to break free of the government system. Is it better to be controlled and ‘taken care of’ or to be free and experience the highs and lows available with individual freedoms?

This is not an unusual theme for a science fiction dystopian but I found the story remarkable particularly because it was written in 1921 by a Russian. The story was banned in the author's own country for over half a century. The world that Zamyatin creates may not be so fantastic by today’s standards but in its own time was an excellent creation. Although the story was a bit confusing, I found myself fascinated by D-503s dilemma of self-discovery. It was also fascinating understanding this was penned by an author living during revolutions in a totalitarian country.

The introduction provides a good history of the writing and the struggles to provide a proper translation. Some translators call the city ‘United State’ but this translation uses OneState which I think fits. Also, the prose and satire are nicely presented in this translation. This may not be as exciting as some of today’s sci fi adventures but it is a worthwhile read in the catalog of vintage sci fi.

Audio Notes: Grover Gardner is a masterful narrator. I have listened to him on many titles and I discovered I had to adjust to his narration on this. Once I was absorbed by the web of the character’s life and confusion I totally enjoyed the easy flow of the narration. I recommend this in audio format.


This audio was from my own Audible library. It qualifies for 2017 TBR, Audio Challenge and “W” in Alphabet Challenge.
Posted by Martha Eskuchen at 11:11 PM