Book Review: Take Me Back: A Give & Take Novella by Kelli Maine

This is a bit of a ghost story with steamy romance.

Take Me Back: A Give & Take Novella
by Kelli Maine 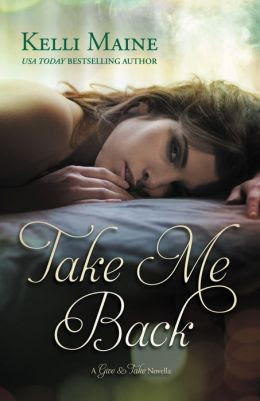 DESIRE THAT CAN'T BE DENIED
Rachael DeSalvo is haunted by the past. She's come home to her beloved Turtle Tear Island, where she looks forward to happy days and bliss-filled nights in the arms of Merrick Rocha. But when she finds a trunk full of old photo albums and handwritten notes, Rachael soon realizes that the island has not given up all its secrets . . .

For long before Rachael and Merrick made Turtle Tear Resort their home, this historic island was a haven for sensual, forbidden affairs. As Rachael and Merrick work to restore the grand hotel to its former glory, they will be caught in the perfect maelstrom of conflict and desire.

"I love the banter between Rachael and Merrick throughout the book..... some steamy scenes that will not leave you disappointed." --The Indie Bookshelf


Review:
I decided to try this novella to see if I might like the series. This story, taking place in the development time of a new relationship between Rachael and Merrick, has an almost gothic setting and feel – probably because of the ghost.

Merrick is apparently a bit older and a suave, experienced business man. He had interviewed Rachael to be project manager for the resort that he is renewing at Turtle Tear Island and the Weston Plantation. Rachael declined the job as it would take her away from her mother but Merrick returned and basically kidnapped her. All that was part of book 1, Taken, but the history was filled in enough in this novella to get the feel for the excitement, yet fragility, of their relationship.

Rachael has become obsessed with a ghost, Ingrid, a woman who lived in the time of the Civil War. Supposedly the ghost had made her wishes known – she wants to be returned from the plantation home to the Turtle Tear property.  She continues to pour over letters and belongings in old trunks to try to find how to bring the ghost back from one property to the other. Merrick is frustrated with her distraction which is pulling her focus away from the 50th year wedding anniversary celebrations that she is supposed to be handling.

Rachael and Merrick have a very intense sexual chemistry but they are still feeling their way to complete trust and commitment in their relationship. Now Merrick feels ignored and betrayed but Rachael also feels betrayed by his withdrawal and refusal to see how important the ghost issue is to her heart. Will this disagreement break the fragile trust they have built?

The story is written in first person which was a bit awkward reading. There is a big focus on the passionate relationship and I would classify this as borderline erotica which  I did not realize when I selected the title. The ghost story was interesting and was a good background for presenting the couple’s relationship problems. They were both stubborn-headed.

The novella is an entertaining, engaging and quick read. Although well written,this was a bit too edgy and therefore not my style. However, others you enjoy a sexy romantic intensity might like to try this series.


I picked this title up from NetGalley.
Posted by Martha Eskuchen at 4:57 PM