Book Review: Quest for the Scorpion's Jewel by Amy Green

This is a fun read as youths face dangerous adventures and begin to learn to trust in God's 'rescue'. 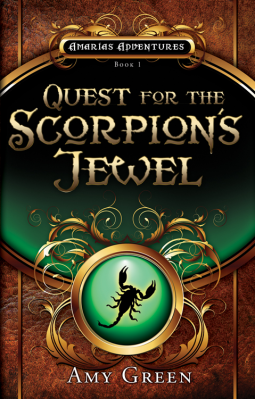 
Book Description
Publication Date: July 1, 2011
The "Amarias Adventures™" begin when 15-year-old Jesse befriends a band of young warriors and risks his life to find a cure for the poisoned Parvel. Though Jesse has a crippled leg, he is asked to join the remaining warriors—part of an elite fighting force known as the Youth Guard—on their mission for the king. Facing danger at every turn, Jesse, Rae and Silas journey over treacherous mountains and across a scorching desert. To make matters worse, an unknown enemy seeks to end their quest before it has even begun. Where is Parvel’s God when they need Him most? And with so little information to guide them, how will they ever complete their mission and find the Scorpion’s Jewel? Will they even escape with their lives?

For more action-packed adventure, look for Book 2 in the "Amarias Adventures™: Escape from Riddler’s Pass."


Review:
Young Jesse is disregarded and disrespected by many due to a limp. He lives with his Aunt and Uncle who take advantage of working him even as they barely feed him.  Yet Jesse is kind and spirited. Jesse is quick to help when a team of Youth Guard, the elite young people trained to serve the King, show up at the Inn with an injured warrior. The guard team is supposed to be four strong but they have already lost one and now their leader, Parvel, has been poisoned.  Jesse sneaks out to get special herbs needed to save Parvel.

Silas is the strong team member and Rae is the feisty, skilled female warrior.  Although he isn’t strong, Jesse is resourceful and crafty. They agree to accept his help to complete their mission. The three set out to seek an audience with a hostile foreign king. Along the way they face treacherous mountain paths and desert sand storms.  Jesse comes in handy with strategies to survive the dangers.  They are fortunate to meet a trader in the desert who will guide them into the city.

However, unknown to the Youth Guard, there is a long term group dedicated to eliminating all Youth Guard members. The team is confused when they have to run and hide from Captain Demetri of the King’s Patrol. Demetri boasts of the corruption of the King while the youths are in cells facing execution. Jesse reveals to the taunting jailor that another injured team member remains at home. Their new friend credits God for helping them escape. The book ends with the teens racing back to Parvel before Demetri can kill him.

The story incorporates a wide gamut of character traits: prejudice, deception and corruption set off against  bravery, loyalty, faith, and more. I liked how Parvel consistently, though gently, shared his faith and how Jesse ponders the intervention of God. The writing is easy and fast paced. This is good entertainment and would make a fun read for middle grade children and even older “kids at heart.”


I picked this title up from NetGalley to provide an honest review.
Posted by Martha Eskuchen at 5:00 AM