This is a charming, sweet Western Historical Romance with a little suspense and mystery.
Paper Roses (Texas Dreams Book #1): A Novel
by Amanda Cabot 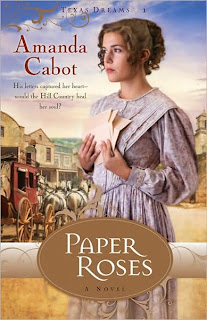 Publication Date: January 1, 2009
The future stretches out in front of Sarah Dobbs like the pure blue Texas sky. Leaving the past behind in Philadelphia, mail-order bride Sarah arrives in San Antonio ready to greet her groom, Austin Canfield, a man she has never met but whose letters have won her heart from afar. But there is one problem--he has died. And Sarah cannot go back East.

As Sarah tries to reconcile herself to a future that is drastically changed, Austin's brother, Clay, struggles with his own muddled plans. Though he dislikes working on the family ranch and longs for a different life, Clay is driven to avenge his brother's death. But something between them is growing and neither Clay nor Sarah is ready to admit it.

Book 1 of the Texas Dreams series, Paper Roses will sweep readers into the Hill Country with a tale of love and loss, closed doors and beautiful possibilities that will leave them wanting more.


Review:
Sarah is a beautiful young woman but flawed. A bad riding accident as a child left her with a limp and terrible fear of horses. She has been raised in society but now faces shame as a result of her father’s heavy financial losses and the resulting death of her parents. She has gathered all that she has left and is determined to make a new life for her younger sister and herself in the rugged lands outside of San Antonio, Texas. She has fallen in love with Austin Canfield, the man who wrote her such beautiful letters–her ‘paper roses.’

Sarah is met at the train station two hours later than expected but that is not the worst of the news. Clay, Austin’s brother, has to break the news that Austin is dead. He was murdered and Clay’s bitter heart is set on finding the killer and exacting revenge. In the past year Clay’s pregnant wife died and his father suffered a stroke. Clay is bitter against God and most anyone else who has a positive attitude.

Clay expects Sarah to turn tail and return to Philadelphia. He is surprised when she announces she is staying but she doesn’t want to be a burden. She sets her mind on finding some work to support herself and her sister. When other work falls through she proposes to the controlling Mayor that she open a school. The community agrees and she finds herself rotating class weekly from the German church to the French church. Unfortunately, her students rotate weekly too as the parents refuse to let their children mingle.

Through strategic maneuvering Sarah finally brings the children together. It is much harder to bring the parents together though. Tempers and prejudices are becoming more enhanced as thefts increase around town. Sarah continues to focus on others while Clay focuses on his revenge.

I liked the historic difficulties presented in the mixed community. Ms. Cabot uses Sarah’s persistent and nonjudging character to lead by example. She encourages the community to begin to see themselves as Americans with different backgrounds and traditions that can be blended to create new traditions.

I also enjoyed how this couple struggles and finally come together. Both have issues of unforgiveness that they have to overcome. The story shares more than just a romance as it addresses numerous small town issues. Matters of revenge and prejudice, and Godly lessons are handled gently. The writing is smooth and easy.

This was our ladies’ book club selection in May. The consensus was that we all enjoyed the easy flow, sweet romance and nice story.


This title was picked for our Ladies' Book Club choice.

ENTER THIS GIVEAWAY for the Review Copy:

* This contest is open US ONLY.
* This contest will close 10 PM (Central) on July 12, 2012.
The winner will be randomly selected from all entries.
WINNERS WILL BE ANNOUNCED on July 13, 2012.
Winners will have 72 hours to respond by email or the winners form linked in the announcement.
Posted by Martha Eskuchen at 5:00 AM