This is a story of Greek gods, super guardians, battles of good versus evil, and, of course, steamy passion for the tortured hero and heroine.
Enslaved (Eternal Guardians)
by Elisabeth Naughton 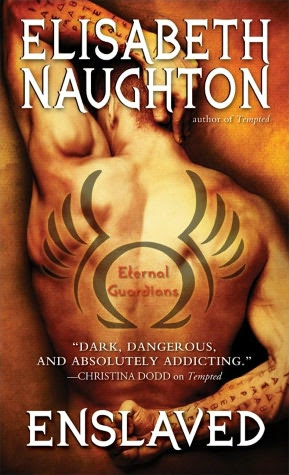 Genre: Paranormal Romance
My Rating: 3.75 of 5.0  (Note there are plenty of positive ratings at Amazon so this is my reflection; just one opinion.)

GRYPHON—Honorable, loyal, dependable...tainted. He was the ultimate warrior before imprisonment in the Underworld changed him in ways he can't ignore.

She calls to him. Come to me. You can't resist. But Gryphon will not allow himself to be ruled by the insidious whispers in his head. And there's only one way to stop them: kill Atalanta, the goddess who enslaved him. But with so much darkness inside, he can't be sure what's real anymore. Even the Eternal Guardians, those who protect the human realms and the gods, want to exile him.

Finding Malea is like a miracle. Somehow he doesn't feel the pull of the dark when she's near. And he's determined to keep her as near as possible, whether she wants him close or not. But she's a temptation that will test every bit of control he has left. One that may ultimately have the power to send him back to the Underworld...or free him from his chains for good.


Review:
Gryphon is, or was, a warrior of the Argonaut Eternal Guardians. That was before he was subjected to torture and bound by a curse to the evil Goddess, Atalanta.  His brother, Orpheus, rescued Gryphon from the Underworld but Gryphon is still enslaved. He is near crazy hearing Atalanta’s voice calling to him to return and do her evil bidding.

Gryphon has been held in seclusion at the castle where the half-breed colony remain in hiding. Gryphon is glad to have battle time but his attack against daemons resulted in a berserker episode that injured his fellow warriors. Now the colony leader, Nick, is set on exiling him before he hurts anyone else.  Gryphon doesn’t want his brother to sacrifice his life and new relationship to go with him so he decides to escape on his own before they send him away.

Gryphon isn’t the only one making an escape from the colony. Malea has been glad to have a reprieve in the family atmosphere of the colony but she is afraid to stay and risk exposing them to danger. Malea is the illegitimate daughter of Zeus and Persephone, Hades wife. She has been running from Hades' hellhounds who are constantly looking for her to drag her to the Underworld so Hades can use her in a power battle among the gods and goddesses. Malea seeks to gain entrance and sanctuary in Olympus but she must prove her worthiness before Zeus will recognize her.

Gryphon snatches Malea in the underground tunnels because he believes she knows the way out.  He is startled to discover that her presence quiets the voice of Atalanta within his head. Although he originally planned to let her go as soon as they were out of the tunnels he decides to keep her with him for her calming effects. Malea objects...at first. But soon she is pulled in by the attraction and honor she finds in Gryphon. Can the two of them find strength together to change their dreams-- assuming they can outrace the daemons, hellhounds, half-breeds, not to mention Atalanta and Hades, who are chasing them?

I have wanted to read this author and series for some time. I was a little concerned that the writing might be a bit bolder and grittier than I like and I was right. It took a third of the book for me to begin to feel engaged. That may have been due to the language, as I did like the characters. Both Gryphon and Malea are lonely and tortured. I was glad that they found each other for support. There is fighting action and the writing flows reasonably well. There is also a good amount of sexual activity that takes up the middle of the story before they return to the battle between the forces of good and evil.  I noted a repetitive amount of dialogue that consists of Gryphon gasping "Malea" and nothing else. Though mostly well written, this didn't really pull me in. If you are a reader who like stories of gods, super guardians and battles of good versus evil, and you like steamy passion, then this would be a good paranormal romance choice.  This story seemed fine as a stand alone although I always think it is best to start at the beginning of a series.


He’d never been just a man. The entirety of his life was wrapped up in being an Argonaut, a warrior, a fighter trained in honor and duty. Females had come on to him, but they’d never wanted him for who he was inside.  Page 242.

“Sotiria.” His hands framed her face, forced her to look up. Heat rushed over her spine when she saw the soft, needy look in his eyes. “Don’t you know I would give up anything for you?” Page 337.

I received this book from Sourcebooks for an honest review.
I will add this to my ARC and New Author challenge lists.
TO ENTER THIS GIVEAWAY for the ARC Copy.

* This contest is open US and Canada.
* This contest will close 10 PM (Central) on November 23, 2012.
The winner will be randomly selected from all entries.
WINNERS WILL BE ANNOUNCED on November 24, 2012.
Winners will have 72 hours to respond by email or the winners form linked in the announcement.
Posted by Martha Eskuchen at 8:22 PM