This story is well written and thought provoking, but dark.

The Miracle Inspector
by Helen Smith 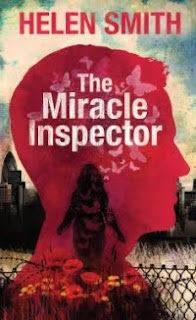 Book Description
Publication Date: May 17, 2010
A dystopian thriller set in the near future. England has been partitioned and London is an oppressive place where poetry has been forced underground, theatres and schools are shut, and women are not allowed to work outside the home. A young couple, Lucas and Angela, try to escape from London - with disastrous consequences.

Helen Smith was the recipient of an Arts Council Award for The Miracle Inspector.

"The Miracle Inspector is one of the few novels that everyone should read, it's a powerful novel that's masterfully written and subtly complex." 5* SciFi and Fantasy Books

"Helen Smith crafts a story like she's the British lovechild of Kurt Vonnegut and Philip K. Dick, only with a feminist slant." Journal of Always Reviews

'Smith is at the very least a minor phenomenon.' The Times


Review:
Lucas and his wife, Angela, live in a future, closed-off London where women are completely restricted to their homes. Groceries and household items are delivered as the women do not go out to those places or any other.  It seems that children are rare and I wasn’t quite clear where the children were in the story.  Lucas seems interested in having a child but either Angela can’t or won’t consider the idea.

The men do all the jobs, and a lot of the work seems to be stifled and a drudgery.  Lucas is privileged to have a prestigious government position as The Miracle Inspector.  His job is to investigate and report on claimed Miracles. Of course no one really expects that he will ever find or approve any of the miracles that are called in.

Artists, whether painters, poets, writers or others of creative nature, are deemed to be subversive rebels of the new order. Most people of such nature, including Lucas’ parents, have been killed. But a close friend of the family, Jesmond, a Bohemian poet, still recites his poetry at forbidden gatherings, dodging capture. This character adds dreams and hope to the story. He has delivered a packet of poems and materials to Lucas who doesn’t want to have anything to do with them. Instead Angela begins to read the poems and she is lured to the freedom expressed by the creative spirit.

The first half of the book there is quite a bit of male fantasizing by Lucas thinking about his own wife and another colleague’s wife.  I found this unpleasant particularly since Lucas seems to love his wife but their relationship is stilted and stagnant because they don’t communicate and she has nothing to share.

I was glad that the pacing picked up in the second half of the book. Lucas had been toying with the idea of escaping London to take Angela to Cornwall. Finally he begins to form a plan and the story moves forward. I would say this was purposeful as the first half really sets the reader in the mode of the lifestyle - the same routine day after day with little outside contact or relationships.

I don’t wish to give any spoiler so I will only say that there is a journey through different, strange and sometimes dark communities.  It is difficult and there exists only a fine thread of hope to keep going.  The entire book is a dark view of societal controls and repressions. It is not a happy or cozy escape, but rather a thought provoking experience. Some readers would find this fascinating - as other reviews note. The writing is superb, at points lyrical which is surprising and a relief with the dark content. My final thoughts: this is interesting but not my cup of tea.

These are some words I jotted down as I read through this book:
Cerebral, artistic, thought provoking, complex, dark, depressing.

Sharp description of the silences between Lucas and Angela:


There were whole worlds contained in those silences; millions of gossamer strands of understanding going back and forth between them, like an invisible version of that fibreglass loft insulation that was illegal now. Location 40.

This is a phrase that made me think "ouch":


Lucas didn't like living in a dictatorship, as he did now, but he could see how democracy could be a bit of a burden when you were expected to obey the will of the people and the people turned out to be such a bunch of fools. Location 160.

I received this book for reviewing through Pump Up Your Book Tour.

Helen Smith is a member of the Writers Guild of Great Britain and English PEN. She traveled the world when her daughter was small, doing all sorts of strange jobs to support them both – from cleaning motels to working as a magician’s assistant – before returning to live in London where she wrote her first novel which was published by Gollancz (part of the Hachette Group).

She is the author of bestselling cult novel Alison Wonderland. She writes novels, poetry, plays and screenplays and is the recipient of an Arts Council of England Award. She’s a long-term supporter of the Medical Foundation for the Victims of Torture and mentors members of an exiled writers group to help them tell their stories.

Pick up a copy of The Miracle Inspector at Amazon: http://www.amazon.com/Miracle-Inspector-Helen-Smith/dp/0956517056
Posted by Martha Eskuchen at 5:00 AM