You'll find quick crime thrills in this short story from the "In Death" series.
Midnight in Death
by J.D. Robb 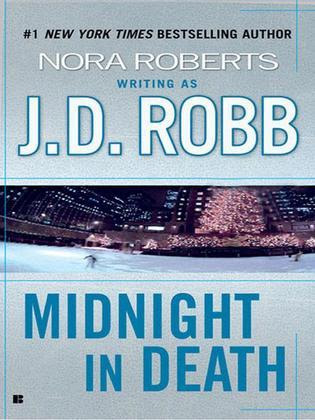 Book Description
Release Date: September 27, 2005 | Series: In Death
The number-one New York Times bestselling In Death series explodes with intrigue, passion, and suspense.  Now, Nora Roberts, writing as J.D. Robb, propels you into the darkest night of Lieutenant Eve Dallas's life—when a killer comes to call...
Eve's name has made a Christmas list, but it's not for being naughty or nice.  It's for putting a serial killer behind bars.  Now the escaped madman has her in his sights.  With her husband, Roarke, at her side, Eve must stop the man from exacting his bloody vengeance—or die trying...


Review:
This is book 7.5 of the “In Death” series featuring futuristic NY detective, Eve Dallas, and her hunky, master financial wizard, husband, Roarke.

Eve and Roarke are planning on celebrating their first Christmas and New Year’s holidays as a married couple. Considering that they both had troubled childhoods they are hoping to set new traditions now that they have found love together.  Unfortunately their plans are interrupted by a sadistic killer, from Eve’s past.  The Christmas eve call brings Dallas to the huge Christmas tree at Rockefeller Center where a local judge hangs naked with a message carved on his chest. The killer, David Palmer, has escaped from prison and has left a list of targets he plans to capture and torture to death, including Eve herself.

Eve calls in her usual support team: Peabody, Feeney and McNab. This is a short story but has the usual high intensity team police procedures, crime suspense and good, if limited, character interaction of the full novels. The investigation is fast and furious as victims are snatched in spite of police protection. Eve’s friend and psychologist, Dr. Mira, is also on the list too so Eve has extra incentive to stop the killer before he gets his hands on anyone else.  In between the crime scenes and trying to puzzle out the killer’s location and next moves there are enjoyable dialogue and romance scenes for Eve and Roarke.

I know the result was inevitable but I was a little disappointed that the very clever killer, who could get around so many police security measures, is brought down rather easily at the end. Otherwise this short story has all of the wonderful features I enjoy in this series and I am ready to pick up book 8, Conspiracy in Death, for the next ‘Dallas’ adrenaline hit. If you like crime thrillers and you haven’t tried this series yet I highly recommend it. This one is okay as a stand alone but you’ll enjoy the characters more if you start from the beginning.


Murder respects no traditions. It ignores sentiment. It takes no holidays.

I do love this series and had to get some of it in before the year flew by! This is from my own TBR Kindle library.
What was I thinking when I limited my challenge to two years for this series (now up to 35 not including the 8 shorts)? I will be updating my button to make it a Challenge but no year - however long it takes. :-)

Posted by Martha Eskuchen at 6:35 PM