What a "nonstop jolt-o-matic thrill ride"! This jumps into action and barely slows to let you (or the heroine) catch a breath.
Blades of Winter: A Novel of the Shadowstorm
by G. T. Almasi 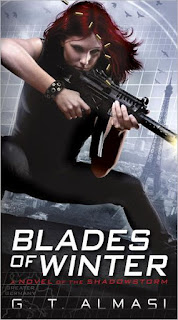 Book Description
Release Date: August 28, 2012 | Series: Shadowstorm
In one of the most exciting debuts in years, G. T. Almasi has fused the intricate cat-and-mouse games of a John le Carré novel with the brash style of comic book superheroes to create a kick-ass alternate history that reimagines the Cold War as a clash of spies with biological, chemical, and technological enhancements.

Nineteen-year-old Alix Nico, a self-described “million-dollar murder machine,” is a rising star in ExOps, a covert-action agency that aggressively shields the United States from its three great enemies: the Soviet Union, Greater Germany, and the Nationalist Republic of China. Rather than risk another all-out war, the four superpowers have poured their resources into creating superspies known as Levels.

Alix is one of the hottest young American Levels. That’s no surprise: Her dad was America’s top Level before he was captured and killed eight years ago. But when an impulsive decision explodes—literally—in her face, Alix uncovers a conspiracy that pushes her to her limits and could upset the global balance of power forever.


Review:
Alix is not your usual 19 year old. She has upgraded eyes, ears and other body parts along with built in adrenaline and kalmers – all ‘mods and enhances’ designed to help her as a covert-action spy.  In this alternate world super-powered spies are the main fighting source to keep the four super powers from war. ExOps is the covert spy agency for the United States.  Alix started training when she was 12 after her top Level father, “Big Bertha”, was believed killed on a mission in Germany.

Alix had a bit of a head start in training as she spent hours learning how to fight and shoot from her father as well as listening to tales of his dangerous missions. She has moved up quickly in the Levels. Although she is a valuable bionic asset with her fearless dedication, her youth and immaturity cause some impulsiveness in her actions. This creates more damage and risk than her superiors might like. On the other hand they are astonished as she snatches herself out of one death threat situation after another!

Alix, (code name Scarlet), is the spy in the field paired with her intelligence office, Patrick, (code name Trick).  They are a team, professionally and personally.  While Alix often allows headstrong emotional reactions to lead her, Patrick provides calm and logic. When Alix begins to face unexpected hostiles in her missions, it quickly becomes clear that there is a mole in the operations and Alix is a target although the motive is unknown.

The story is laid out well with intense action broken up with journal type entries. The CORE (Catalogue of Records, ExOps) entries explain the history of the wars that divided the super powers, the current politics, the bionic development, the mods, enhances and Levels and other world building details. Although these chapters are less intense, they are short bursts of information needed to better understand Alix’ world.

I loved the underlying humor, the intriguing world building, the high paced action and the suspenseful twists.  Things don’t always make sense and Alix’ flaws sometimes have her stumbling to success leaving a wake of carnage and collateral damage. The ending is a (not completely unexpected) surprise and left me with an “Ack! It ends now?” Mr. Almasi - bring on the next one!  If you like fun sci fi and action I highly recommend this title.


Each series of modifications and enhancements brings the operative a new level of performance, hence the name for these agents: Levels.  Location 410.

Explaining the limitations of clones:


It turns out the experiences that shape our characters still have to be lived through. There’s no shortcut. For now. Location 5584.

I received this from Del Rey on NetGalley for an honest review.
This is set partly in Virginia for my Where Are You Reading Challenge.  I will also include it with the New Author challenge list.
Posted by Martha Eskuchen at 5:30 AM