The history in this story is fascinating.
Glenfiddich Inn
by Alan Geik 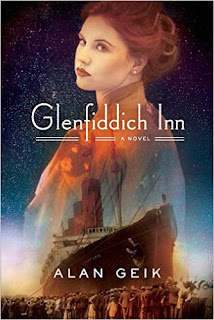 One hundred years ago August 1915, the Great War was beginning its second year. Nobody thought the initial battles would last long-and yet it soon evolved into the most devastating, horrific war known to man. It would continue in its senseless brutality for two more years—ultimately dragging the United States into it.
It’s America in 1915—
The still distant Great War in Europe creates unexpected opportunities for the Morrison and Townsend families in Boston while, at the same time, they watch with dread as the ferocious conflict reaches across the ocean.
William Morrison’s boss, the bank president Joe Finnerty, is also a relentless con man. Whether it’s elaborate stock frauds, war profiteering or just dipping into a widow’s trust account—Finnerty’s ever-cheery amorality both captivates and repels William.
William’s wife, Margaret is also captivated—but for her it is with wireless voice transmissions. It’s called “radio,” and while she is certain it will soon transmit a voice, even music, for as much as several miles, she is dismayed by its use on the battlefields of Europe.
Margaret’s sportswriter brother Byron Townsend covers the Boston Red Sox and its simpleton teenage sensation, Babe Ruth. He believes the World War will be the defining event of his generation and he intends to go to the front lines as a journalist.
Byron’s wife, Helen, shares Margaret’s passion for radio. They form a strong bond in their quest for independence—a bond that will be severely tested by love affairs and patriotism.
But after a German torpedo sinks the ocean liner, the RMS Lusitania, no one’s life will ever be the same again.


Review:
William Morrison, is a bank employee of an ‘Irish’ con man who is very like a mobster without the mob. William was raised by his aunt and uncle who owned a struggling inn – the Glenfiddich Inn. Although his childhood was a struggle, William was lucky in love, snagging the hand of the lovely (and sexually mischievous) Margaret Townsend. Margaret is the daughter of wealthy news mogul George Townsend. Margaret’s brother, Byron, is a sportswriter who gets to see the Boston Red Sox, and its crude sensation, Babe Ruth, up close. Byron is fed up with the routine and shallowness of sports reporting and longs to be a foreign correspondent on the frontlines of the World War.

Although women are not yet prevalent in the work field, Margaret and her sister-in-law, Helen, become involved with the birth of the radio. The women are convinced that the radio will change the picture of news reporting. This would be true if the government would allow it to be used by the public. Instead, when the United States gets pulled into “the great war’, the government takes control of the radio technology for its own use.

This story follows the Morrison and Townsend family members as they struggle through a depressed economy, corruption, censorship, emerging technology, burgeoning feminism, political unrest and the plague. At times I felt the story was disjointed but this was because the author moved among the threads following the escapades of the four main characters while weaving in the interaction and impact of the extended family.

The blurb notes that William was ‘both captivated and repelled’ by his boss’s amorality. Similarly, I was fascinated and repelled by this frank microcosm of life in Northeast America (New York and Boston) 1915 - 1919. I didn’t care for the foul language and the casual adultery even though it seemed to fit the characters and is probably more realistic than I would like. I have not read much about WWI and I was captivated by the historical details. The author reveals strong research through characters used to show ‘first hand’ views of the sinking of the RMS Lusitania, the emergence of the radio, German attacks along the eastern shore and the insidious censorship of the war news that extended even to the rapidly spreading, deadly flu pandemic.

Family drama is not a genre that I seek out but every once in a while I fall into one because of other elements. In this story it was the historical details that caught and kept my interest. The characters are rather shallow but developed sufficiently for the storyline. The writing style and language fit the historic period from the outset, making me feel as if I was watching a vintage movie. I would recommend this to readers who like strong historical detail.