I found this to be an engaging mystery with strong characters.
Kill and Run: A Thorny Rose Mystery, Book 1
Written by: Lauren Carr
Narrated by: C.J. McAllister 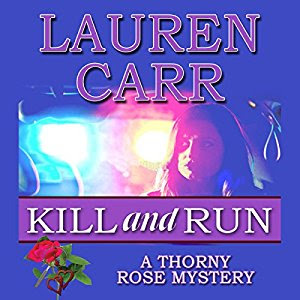 Publisher's Summary
Five women with seemingly nothing in common are found brutally murdered in a townhome outside Washington, DC. Among the many questions surrounding the massacre is what had brought these apparent strangers together only to be killed.
Taking on his first official murder case, Lieutenant Murphy Thornton, USN, believes that if he can uncover the thread connecting the victims, then he can find their murderer.
Before long, the case takes an unexpected turn when Murphy discovers that one of the victims has a connection to his stepmother,. One wintry night, over a dozen years before, her first husband, a Pennsylvania State trooper, had been run down while working a night shift on the turnpike.
In this first installment of the Thorny Rose Mysteries, Lieutenant Murphy Thornton and Jessica Faraday sift through a web of lies and cover-ups. Together, can the detectives uncover the truth without falling victim to a cunning killer?
©2016 Terri Zaleski (P)2016 Terri Zaleski


Review:
Lieutenant Murphy Thornton, USN, is newly married to a wealthy young woman, Jessica Faraday. He’d like to have more time for his new bride but he unexpectedly finds himself lead on his first homicide case. Although his crotchety boss didn’t plan for him to really take the case from the local police, when he discovers that the fifth woman murdered at the scene was a naval petty officer, he claims the case under NCIS jurisdiction. His boss hasn’t liked Murphy since he was assigned to her office and she resents his good looks, polish and apparent good reputation. She has no idea that he is really part of a secret government force.

Murphy’s father, Joshua, was a former Naval Commander now turned top notch lawyer. Joshua has recently married Homicide Detective Cameron Gates. Cameron has her own past demons as her first husband was killed by a hit and run four months after they wed. She has been fortunate to find love again but still has some healing to do, especially when the FBI inform her that they have just learned the identity of the man who killed her first husband. Cameron flies to Washington, DC, to interview the man. She will visit and stay with Murphy and Jessica but soon Cameron becomes engaged in Murphy’s investigation when a connection is discovered that links to her husband’s death. Jessica has just received her Private Investigator license so she insists on stepping into the investigation too.

The mystery uncovers a past string of suspicious deaths and although they point to a particular person the investigators are having a difficult time gathering hard evidence. The author does a good job connecting the clues and crimes and adding a few twists for extra interest.

I really liked the strong Thornton men and their lovely women. Cameron and Jessica are independent and have strengths to add to the story. There are also children and animal characters who are important parts of the story. I enjoyed getting to know the cat, dogs and Monique, a plate sized tarantula.

Ms. Carr does a good job portraying real characters and developing their personal lives while blending in ‘office politics’ and the mystery. The story is a good mix of cozy and intrigue. It moves along quickly and kept my attention wanting to know what would happen next. I recommend this to readers who like a good mystery with warm characters. I look forward to reading more in this series and earlier series by Ms. Carr. Please watch for my review of the next book, A Fine Year for Murder, which will post on March 16.

Audio Notes: At first I thought the narration by C.J. McAllister was a bit stiff. However, as I got into the story I found the narration worked well to deliver the characters and intrigue. Ultimately the narration added to my enjoyment of the story.


I received this through iReads Book Tours for tour review. It qualifies for my 2017 Audio Challenge. .

Book Trailer for KILL AND RUN:

Lauren Carr is the international best-selling author of the Mac Faraday, Lovers in Crime, and Thorny Rose Mysteries—over twenty titles across three fast-paced mystery series filled with twists and turns!


Book reviewers and readers alike rave about how Lauren Carr’s seamlessly crosses genres to include mystery, suspense, romance, and humor.


Lauren is a popular speaker who has made appearances at schools, youth groups, and on author panels at conventions. She lives with her husband, son, and four dogs (including the real Gnarly) on a mountain in Harpers Ferry, WV.
Connect with Lauren: Website  ~  Twitter  ~  Facebook