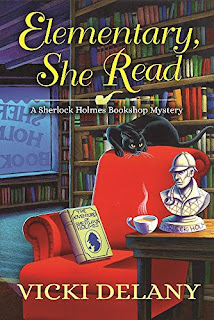 Gemma Doyle, a transplanted Englishwoman, has returned to the quaint town of West London on Cape Cod to manage her Great Uncle Arthur's Sherlock Holmes Bookshop and Emporium. The shop--located at 222 Baker Street--specializes in the Holmes canon and pastiche, and is also the home of Moriarty the cat. When Gemma finds a rare and potentially valuable magazine containing the first Sherlock Homes story hidden in the bookshop, she and her friend Jayne (who runs the adjoining Mrs. Hudson's Tea Room) set off to find the owner, only to stumble upon a dead body.

The highly perceptive Gemma is the police’s first suspect, so she puts her consummate powers of deduction to work to clear her name, investigating a handsome rare books expert, the dead woman's suspiciously unmoved son, and a whole family of greedy characters desperate to cash in on their inheritance. But when Gemma and Jayne accidentally place themselves at a second murder scene, it's a race to uncover the truth before the detectives lock them up for good.

Fans of Sherlock Holmes will delight in the sleuthing duo of Gemma and Jayne in Elementary, She Read, the clever and captivating series debut by nationally bestselling author Vicki Delany.


Review:
Gemma is an Englishwoman living in West London, Cape Cod. She helps her Great Uncle by managing his Bookshop and Emporium and assisting with the next door tea room of her friend, Jayne. The bookshop does not often have rare, first edition Sherlock books but it has a good collection of knick-knacks featuring the famous detective and his stories.

The shop is filled with a tour group when a strange woman slips in and out. Gemma is the type who is extremely observant of people and situations. She noticed the woman and after the store cleared she discovers what might be a valuable early Sherlock magazine that was tucked in one of the bookshelves. Gemma doesn’t understand why the woman left the item and, finding a clue to the woman’s lodging, Gemma drags Jayne along to the hotel to return the magazine. When they knock on the door, Gemma steps in to find the woman dead!

Gemma manages to assess the crime scene before being removed with a bit of suspicion focused on her for being there. The officers sent to the crime scene turn out to be a detective, Ryan, she has a past with, and his new partner who immediately suspects Gemma. Gemma isn’t convinced that the police will do a proper investigation, especially since they are focusing on her. In spite of objections to her involvement, Gemma sets out on her own investigation of the family drama behind the rare magazine. Needless to say, Gemma has an eye for detail and a nosey bent that gets her into trouble.

I greatly enjoyed Gemma’s obsession with detail, even as it might drive some people nuts. The author carries the detail well in settings and crime clues. There are a couple of suspects and even Gemma misses a clue or two until it is almost too late. I enjoyed the tone of the story and the deductive reasoning with Jayne adding a bit now and then, - very reminiscent of Sherlock and Watson. (There is even a character named Moriarty who doesn't like Gemma.)  I enjoyed the hint of chemistry between Gemma and Ryan and have hopes for more of that to develop in future books.

The writing moves along well, even with the compulsive details. I found the read to be quick, fun and engaging. I highly recommend this to readers who enjoy Sherlock Holmes mysteries, enjoy attention to detail and like cozy mysteries.


I received this title from NetGalley for Great Escapes Book Blog Tours. It qualifies for 2017 NetGalley Challenge and "E" on Alphabet Soup Challenge.

is one of Canada’s most prolific and varied crime writers. She is the author of twenty-three published crime novels, including standalone Gothic thrillers, the Constable Molly Smith series, and the Year Round Christmas Mysteries. Under the pen name of Eva Gates

she is the national bestselling author of the Lighthouse Library cozy series.

Vicki lives and writes in Prince Edward County, Ontario. She is the past president of the Crime Writers of Canada.

Posted by Martha Eskuchen at 12:30 AM