This is a chilling dystopian world where an older man and his friends finally take a stand.

The Detainee
Written By Peter Liney
Narrated by Jeff Harding 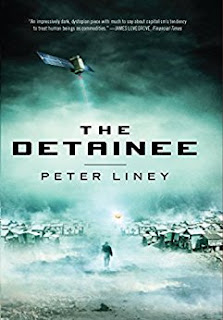 When the fog comes down and the drums start to beat, the inhabitants of the island tremble: for the punishment satellites - which keep the tyrannical Wastelords at bay - are blind in the darkness, and the islanders become prey.
The inhabitants are the old, the sick, the poor: the detritus of Society, dumped on the island with the rest of Society's waste.
There is no point trying to escape, for the satellites - the invisible eyes of the law - mete out instant judgement from the sky. The island is the end of all hope - until 'Big Guy' Clancy finds a blind woman living in a secret underground warren, and discovers a reason to fight.


Review:
Big Guy Clancy is a man in his sixties shuffling through life on the “Island” of castoff members of society as well as castoff garbage. The criminals, the elderly, the sick, the poor – those deemed to have no value or nothing good to contribute to society – have been dropped off on the Island to live a hopeless existence among the refuse of the mainlanders. The youth who have strength have formed into a gang of Wastelords. They pick through the waste and their leader trades with the powers on the mainland. During the day, the aggressive behaviors of the inhabitants are quelled by satellites that strike immediately upon perpetrators of violence. But under the cover of fog, or especially in the dark of night, the young gang members, with the background of drumming, swarm into the village to wreak terror and brutal death. The peaceful villagers do their best to hide in their makeshift tents and lean-tos.

Clancy, a former ‘thug’ for a mob leader, is friends with neighbors, Jimmy and Delilah. Small and nearly crippled Jimmy is a collector and creative inventor. He tries to piece together useful equipment and wishes he had power to operate some of his gadgets. Delilah is a tough as nails, former prostitute, who fights with Jimmy cats and dogs even as they take care of each other in a rough way.

Clancy and his friends are discouraged. Clancy goes out to the old town area scavenging for any missed treasure even though the buildings have been well picked. One visit he realizes that he can dig up some copper tubing that might have some value - if only he can do it without the Wastelords attacking him. His endeavors lead to trouble and Clancy wakes up injured in an underground tunnel being cared for by a strange barbarian looking woman. Her looks are alarming enough but then Clancy realizes she is blind! As Clancy is nursed back to health by Lena he finds a reason to seek strength and a way to fight back.

This is a different dystopia as it is filled with older characters although young people play a part in the story too. The story has a roughness to it that is supported by the narration. The story is permeated with despair and frustration. Yet the author finds a way to make a path to love, moments of joy and even hope. There is graphic violence, some strong language and some tragic misery. Part, but not all, of the climax is somewhat predictable but I liked getting to the ending. This story does have a clear ending but the struggles for Clancy and his band of survivors continues for another round.

Audio Notes: Jeff Harding does a good job with the narration as he portrays the different character voices. He manages to convey the sorrowful struggles with the roughness and simple natures of the “Big Guy”. I am glad I received this title in audio format.


I received this audiobook as a free trial from eStories. It qualifies for my 2017 Audio Challenge.

I enjoyed my experience at eStories. Setting up an account and downloading the book were smooth and easy. Picking the audiobook from all the choices was a bit more difficult!

Get Your First Story For FREE
After 30-day trial, pay only $11.99 per month. Basic plan includes one audiobook each month.
JOIN NOW - GET YOUR FIRST STORY FREE
Start your Free 30 day Trial Now Listen to ANY one audiobook for Now.

Find Your Next Favorite Audiobook
eStories has over 100,000 audiobook titles, including best-sellers spanning every genre and new releases added each week. Personalized search and discovery tools make it easy to find your next story.

Listen Everywhere You Go
Download our free app for Android or iPhone and play your audiobooks anywhere, even offline. Your stories automatically sync across up to 10 devices. You can even listen to audiobooks in your Bluetooth®-enabled car.

Get Great Member Benefits
Enjoy 33% off additional audiobooks, discounted extra credits, access to exclusive promotions, and unlimited cloud storage. Members also get 6 months to use credits and up to 30 days to return a book if not 100% satisfied.
Posted by Martha Eskuchen at 12:05 AM