Happy Friday!
I've felt good getting through files at work this week. My desk is still covered with files but I have made progress.
Hubby continues to get stronger. We are hosting a family (friends of our son) who evacuated the coast due to hurricane Matthew. We are praying for safety and minimal damage for all those still in the path of the storm.

Thank you to all who entered the September 30 Pick. This week there was one automatic win. Automatic wins are those who requested the book four times without other people asking for that book during those weeks. There were one title blocked by three requests.
AUTO: bn100 gets Freedom's Stand


CONGRATULATIONS
to Random.org picked Winners from September 30 Pick:
Mystica gets a GC
Miki also gets a GC 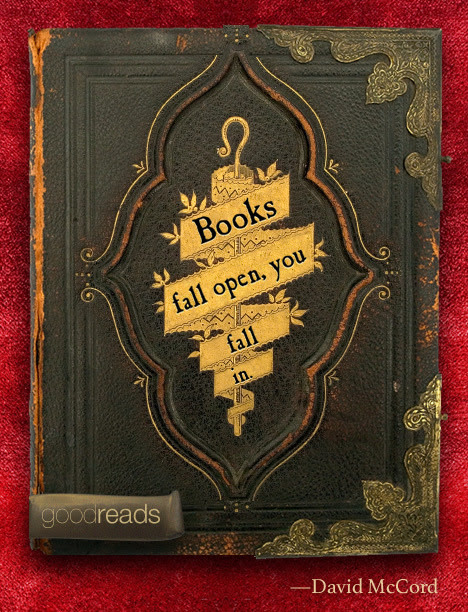 Love to fall into books. :-)
Image found at Tumbler.

(*Three more very old books from my Gothics box.)
PAIRS:
Into the Night (book 5) and Gone too Far (book 6) by Suzanne Brockmann
The Wedding Night of an English Rogue: A Novel (A Boscastle Affairs Novel Book 3)
The Wicked Games of a Gentleman: A Novel (A Boscastle Affairs Novel Book 4) by Jillian Hunter
SINGLES:
*Bloodstone by Lynn Benedict (1973 - yellowed)
*The Brittany Stones by Lynna Cooper (1974 - yellowed; corner of cover cut)
Her Scoundrel by Geralyn Dawson
In Search of Lucy: A Novel by Lia Fairchild
No Place for a Lady by Katherine Greyle
Wicked by Beth Henderson
To Die For: A Novel (Blair Mallory Book 1) by Linda Howard
The Inheritance by Joan Johnston
A Dark Champion by Kinley MacGregor
*The Man in the Garden by Paule Mason (1969 - yellowed)
Mysterious: The Right Path / This Magic Moment / The Search for Love by Nora Roberts (2008)
The Spitfire by Bertrice Small

(I will post a picture later. *Four of these books are very old; pulled from a box of gothic novels I have had for many years. They may not be wanted by anyone and if so, I will donate elsewhere in time.)
SINGLES:

SINGLES:
The Shadowing by Joan Overfield

Cruise to a Wedding by Betty Neels

Thinner by Stephen King
Foundation (Foundation Novels) by Isaac Asimov
Magic: The Gathering Distant Planes, An Anthology
The Willful Widow by Valerie King (spine wear)
An Honorable Man by Rosemary Rogers (spine creases)
A Courtesans Guide to Getting Your Man by Susan Donovan and Celeste Bradley -- NOTE This book has dog bite damage; it is missing half back cover and the edges of pages in the back third of the book... it does not effect the text but I will understand if no one wants this one

The Trailsman: Texas Lead Slingers by Jon Sharpe
Anthology: Something Borrowed, Something Blue - this book has spine creases and minor water damage...I thought I had read it and liked it but now I realize it was another anthology I read with Elaine Barbier.

I am happy to say that so far about 1002+ books have found new homes! YAY. I have to update my print out to check the exact number sent out - a few were never claimed. I periodically update the lists - deleting those won. You can still go to the Friday Pick list link to see older posts and the older lists book pictures if you want!