This is a charmingly fun and easy romance.
Kiss an Angel
Written by: Susan Elizabeth Phillips
Narrated by: Anna Fields 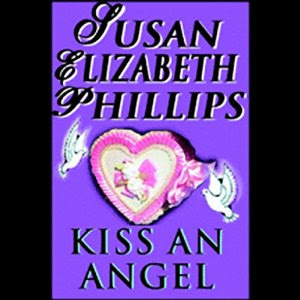 Publisher's Summary
Arranged marriages seldom happen in modern America, so Daisy Devreaux hates her father's ultimatum: marry the humorless man he has picked for her, or go to jail. It's not much of a deal for Alex Markov, the prospective groom, either. He's got no time to indulge an uptown girl.
So Alex puts Daisy to work in his traveling circus, expecting the harsh realities will break her. Instead, he finds she's got heart enough for both of them.
©1996 Susan Elizabeth Phillips; (P)1996 Books on Tape


Review:
Daisy was raised by a beautiful but flighty mother who loved men. Pampered as a princess, Daisy was never really grounded in living skills. When her mother passed away Daisy went on a spending spree with no understanding of the debt that she faced. Her wealthy father gives her ultimatum – go to jail for writing bad checks or marry a man he has chosen for her. The man, Alex, may be strong and handsome but Daisy doesn’t like his stern, humorless countenance.

Alex is a private man who had never intended to marry. But he has his own good reasons for agreeing to marry Daisy – not that he plans to tell her why. He doesn’t plan to tell her much of anything as he has no time to indulge a ‘rich princess’. He does pan to put her to work in the traveling circus really hoping to chase her back to daddy.

Daisy is dismayed to find herself in a ratty trailer in the middle of a struggling traveling circus. Not only is the living situation a drop for her but the circus owner clearly resents her presence. Most of the circus members are willing to welcome Daisy and are particularly thrilled to learn she is married to Alex – even if he doesn’t seem too thrilled. Then an event occurs that turns all of the workers against her.

Daisy is punished with the lowest of duties – cleaning up after the elephants. Everyone is expected to pull their weight and no one cares that Daisy is afraid of dogs much less elephants! She now has to suffer through the worst tasks and the snubs and jeers of everyone or she has to admit defeat and run home to a father who already considers her a failure at life. No one suspected the heart that Daisy reveals. Although nearly tempted to give in, instead she finds the grit to stick it out and to push Alex to open his heart.

I do enjoy the light romances by Susan Elizabeth Phillips (SEP). She creates distinct characters and puts them into real life, if sometimes unusual, settings. This circus setting was great fun and Daisy does make a few surprising friends. I liked how her character grows into the inner strengths that she always had but never had to reach. Alex has his own damaged past and Phillips creates a charming story as Daisy’s exuberance, bravery and out right heart melt his ice cold walls.

The story is full of heart and humor. There is some foul language which is too bad that you have to jump past that. I recommend this fun read and other romances by this author.

Audio Notes: Anna Fields, who died in 2006, was a fabulous fit for SEP romances. She gives each of the characters their own voice and makes them come alive. I always enjoy listening to her narration and am sorry she is no longer with us. I realized a bit into this book that is was familiar. I read it in print in 2009. I enjoyed revisiting it in audio.


I added this to my Audible library in 2012. This adds to my Audio and TBR Challenges and is a "K" in Alphabet Challenge.
Posted by Martha Eskuchen at 8:16 PM