This story is entertaining and fast-paced but has a cliffhanger ending. 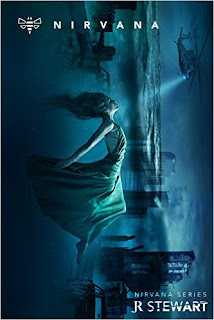 When the real world is emptied of all that you love, how can you keep yourself from dependence on the virtual?

Animal activist and punk rock star Larissa Kenders lives in a dystopian world where the real and the virtual intermingle. After the disappearance of her soulmate, Andrew, Kenders finds solace by escaping to Nirvana, a virtual world controlled by Hexagon. In Nirvana, anyone’s deepest desires may be realized - even visits with Andrew.

Although Kenders knows that this version of Andrew is virtual, when he asks for her assistance revealing Hexagon’s dark secret, she cannot help but comply. Soon after, Kenders and her closest allies find themselves in a battle with Hexagon, the very institution they have been taught to trust. After uncovering much more than she expected, Kenders’ biggest challenge is determining what is real – and what is virtual.

Nirvana is a fast-paced, page-turning young adult novel combining elements of science fiction, mystery, and romance. Part of a trilogy, this book introduces readers to a young woman who refuses to give up on the man she loves, even if it means taking on an entire government to do so.


Review:
Larissa was a talented musician when she met her husband, Andrew. She was reluctant to become involved but she finally succumbed to Andrew’s persistent charm, leaving her music behind to join him on the primary military base where he was recruited by the government.

Andrew was a brilliant scientist and the Hexagon organization snagged him to do research for them. He loved Larissa but he was also dedicated to the programming work he was doing, which included keeping secrets.

Larissa is devastated by Andrew’s disappearance during a research expedition. She refuses to believe he is dead because he seems so alive when he visits her in the virtual world of Nirvana. Several of Andrew’s friends try to get her to accept that Andrew is gone but they are giving her mixed messages that he may not be ‘dead’, but still he is unavailable.

Larissa struggles with her feelings until her therapist, Dr. Krag, sends her to the Bubble, a privileged, sheltered community designed by Larissa’s closest childhood friend, Serge. Larissa seeks help from Serge and follows up on another mysterious clue. Serge is thrilled to see Larissa and he is determined to convince her that she can find love again… with him.

Larissa doesn't realize that the primary military leader, Dr. Krag and Serge are connected by a history of deception and cover-ups. They will take whatever steps are necessary to protect the secrets of the true events that led to their profitable programs.

I was engaged by the story and by Larissa's determination to pursue the mystery of what happened to Andrew. I was fascinated by the description of the society changes resulting from the extinction of bees. On the other hand, I was horrified by the political and corporate manipulation and corruption.

The author did a good job building the various communities, but particularly Nirvana, the Bubble and the open source virtual world. I found the plot to be twisty and I easily understood how the real world and virtual world were becoming twisted for Larissa. (Think of "the Matrix".) I was eagerly waiting to get answers when there is a surprise revelation and a sudden end that had me saying "What??"  I really felt it was a terrible place to end the book because it forces a reader to make a choice – buy the next book to figure out what is happening or walk away possibly disgruntled.

The story is entertaining, fast-paced and reads quickly. I recommend it with the caveat that a cliffhanger ending leaves many questions to be answered in the next book.


This is a selection received through NetGalley for an honest review. It adds to my NetGalley challenge and is N for the Alphabet Soup Challenge.

About the Author:
J.R. Stewart has worked on many corporate projects throughout a prolific IT academic and consulting career, and is involved with many confidential virtual reality projects. After working on advanced “VR” technologies for over a decade, Stewart grew concerned about the implications of this work and the possible psychological effects that it may have on its users.


Posted by Martha Eskuchen at 5:30 AM