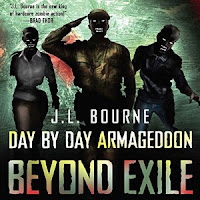 
The first book of Day by Day Armageddon took us deep into the mind of a military officer and survivor as he made a New Year's resolution to start keeping a journal. The man kept his resolution and brought to us the fall of humanity, day by day. We see the man transition from the life that you and I live to the prospect of fighting for his very survival against the overwhelming hordes of the dead. We see him bleed, we see him make mistakes, we witness him evolve. The highly anticipated sequel to the best-selling underground cult classic, Day by Day Armageddon, begins where the first novel left off.
BEGIN INTERCEPT
Armies of undead have risen up across the U.S. and around the globe; there is no safe haven from the diseased corpses hungering for human flesh. But in the heat of a Texas wasteland, a small band of survivors attempt to counter the millions closing in around them.
INTERCEPT COMPLETED
Day by day, the handwritten journal entries of one man caught in a worldwide cataclysm capture the desperation--and the will to survive--as he joins forces with a handful of refugees to battle soulless enemies both human and inhuman from inside an abandoned strategic missile facility. But in the world of the undead, is mere survival enough?
©2010 J.L. Bourne (P)2010 Audible, Inc.

Review:
As I began to write this review I realized I do not have a name for the protagonist. He is listed in Book 1 as “the Unknown Survivor (the TUS). We know that he was an officer who found himself the soul survivor of the plague that turned his squadron into the living dead. Now he is a man struggling to survive with a small group of other survivors. TUS journals each day to keep track of the epidemic and the brave efforts to fight off the undead and find other survivors.

TUS is doing well with a group at their compound at “Hotel 23”, an abandoned, underground, strategic missile facility in Texas. The Hotel has proved to be a secure haven from the world of the undead although it still suffers threats from human raiders.

The journaling continues as TUS and his friends forage for food, fuel and (noncombatant) survivors. The Hotel 23 crew hear a distress call from a Marine squadron whose vehicle broke down. TUS and others run a rescue mission to save the Marines from the undead. They don’t want the Marines to know where the compound is so the men are blindfolded for the travel before they are returned to their own unit. Of course the Marines then try to find Hotel 23 and when they finally arrive they threaten to break in until TUS realizes he has a way to control the situation.

TUS also finds a note at a Texas airport indicating there are other survivors at another airport. Of course, he sets off on another rescue mission and encounters more hordes of undead.

Another ‘adventure’ ends with TUS surviving a helicopter flight that strands him far from home. He is struggling along the way home when he gets unexpected help in the form of supplies dropped from the sky. The supplies give him an advantage that just might allow him to work his way back to Hotel 23. TUS runs into difficult situations and is lucky to find another military specialist, Saien, who joins him along the trek.

Even in a time when 90% of the population are undead, TUS discovers he still has to deal with authority and manipulation. He will have to make some political decisions when opposing sides command his actions.

The story is full of gritty action and intrigue. The journaling approach works to present TUS’ view of action and military input. However the journal (and story) have a limited emotional presentation. There is little depth and background development among most of the secondary characters. Still the story is entertaining. I recommend this to readers who enjoy the zombie genre.

Audio Notes: Jay Snyder does a good job with the narration. He manages to convey the intensity in the action even though he is reading a journal. I enjoy this in audio

I listened to the first book some time ago and decided to listen to this one which has been on my Audible shelf since 2011. This qualifies for my Audio Challenge and as a TBR shelf read.
Posted by Martha Eskuchen at 10:09 PM