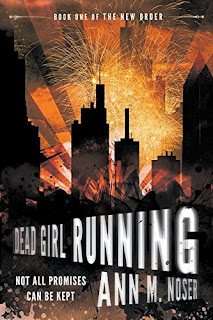 Eight years ago, SILVIA WOOD's father died in an industrial accident. After suffering through years of Psychotherapy Services and Mandated Medications for depression and multiple suicide attempts, she longs to work in Botanical Sciences. When the Occupation Exam determines she must work in Mortuary Sciences instead, she wonders if the New Order assigned her to the morgue to push her over the edge.
To appease her disappointed mother, Silvia enters the Race for Citizen Glory, in an attempt to stand out in the crowd of Equals. After she begins training with "golden boy" LIAM HARMAN, she discovers he also lost his father in the same accident that ruined her childhood. Then Silvia meets and falls for Liam's older cousin, whose paranoid intensity makes her question what really happened to her father.
As the race nears, Silvia realizes that she's not only running for glory, she's running for her life.


Review:
Silvia lives in a world where the New Order keeps citizens safe by walling them in, controlling their career paths and parenting rights, providing health care, allocating housing and rationing food. Cameras are everywhere to monitor the citizens and make sure no one is disruptive so living can be free of conflict and stress.

Sylvia lost her father to an accidental fire when she was 10 years old. She was initially devastated and didn’t find any support from her grieving mother. She was trying to cope until the therapists and the ‘men in dark suits’ kept hounding her with questions. She finally found a way to push through the heartache with her own routines, gaining strength in running and yoga. However the damage to her records was done and her occupational testing sent her to the unpopular office of Mortuary Sciences instead of the gardens of Botanical Sciences where she had longed to work.

Over the past eight years she has become close friends with her boss, Gus, who finds her to be a smart and dedicated assistant. Her mother wishes she would meet friends her own age and is glad when Silvia meets Liam at the gym.

Liam is a popular guy who wants Silvia to help him to train for the prestigious Race for Citizen Glory. Her initial reluctance changes to eagerness when she learns they can actually train by running outside instead of inside on the treadmill. That alone makes it worth her while. Then she meets Liam’s older cousin, Franco, who works in the Botanical Sciences. Silvia tries to resist her growing attraction to the paranoid Franco who is intriguing one minute and bizarre the next.

Silvia has to visit the medical office to register as an 18 year old, then during the training she is annoyed that she has to make repeated return visits. First they give her a birth control implant and then they continually check her for pregnancy.

Bit by bit, Silvia sees strange happenings as she learns secrets surrounding her father and her new friends. She and Liam have a good chance of winning the race which will give them extra rations and special treatment. But Silvia begins to suspect that the extra attention is not necessarily a good thing.

I found this dystopian very engaging. I liked the different, well-developed characters and their interactions. The society is a creepy and chilling, especially as more of the political ambitions and disparities are uncovered. The author uses the mortuary setting to include interesting medical knowledge. The ending clearly leaves the world open for another dangerous adventure but it gives this book a natural place of closure.

I recommend this to readers who like dystopian stories, mystery and strong characters. I would like to read more by Ms. Noser and will watch for the next book in this series.


I received this sci fi dystopian from the author, for an honest review, after seeing it at Caffeinated Book Review. (Thanks for sharing this Kimberly.)