This is an emotionally charged sequel propelling the series toward combustion! 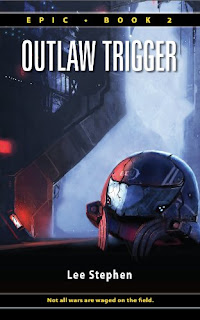 Book Description
Publication Date: September 25, 2007
They say every man has a breaking point-every man can be pushed off the edge. Scott Remington entered EDEN with the heart of a lion. He forged glory in the furnace of war. But on the heels of dawn, darkness awaits. Only when stretched to the limit will a man truly learn who he is. That limit is about to be breached. Lines will be crossed. Sides will be chosen. And faith will be put to the test. Will the righteous prevail?


Review:
Scott has told all of his friends about his fiancée, Nicole. They are all excited (him most of all) when she arrives at Novosibirsk, the Russian base, to visit. Everyone finds her as lovely as Scott proclaimed, but at least one person isn’t interested in her beauty and kindness.

The events that occur send Scott into a spiral and cause consternation for all the members of Unit 14. Scott's foundation of faith is challenged as he feels abandoned and turns his anger on God, along with everyone else around him. Initially I wasn't sure why the author spent such time and detail on the sweet romance between Scott and Nicole. However, the reason becomes clear as the book progresses. Emotions run fast with love as a high but despair and horror hot on its heels. There is love, joy, despair, danger, betrayal, conspiracy, sorrow and –maybe– a small spark of hope.

The soldiers deal with upheaval and an expansion of Nightmen troops at Novosibirsk. Meanwhile, Benjamin Archer, the newest member to the Eden Command Council, brings fresh eyes and new ideas to the ruling Judges. Archer has never fought in war but he proclaims himself to be a tactician. He quickly charms many of the Judges with his astute assessment of trouble in the form of General Thoor and the Nightmen. Archer sets out to prove his worth to the remaining skeptic on the Council by introducing a plan to challenge, and ultimately get control of, Thoor.

There are still battles with the puzzling aliens but this book has more relationship time and less action than book one. Still, I was completely caught up in the story, running the gamut of those emotions, and wrenching my heart along the way. I wasn’t happy with what was happening, but I believe I clearly saw the author’s intended message: the best of us become weak and can be manipulated by evil if we lose focus on the right way.

Mr. Stephen has done an excellent job of creating full characters and a gripping, twisting, plot. (I was also challenged to look up the precise meaning of a word that was new to me. I liked that.)  This was a good sequel to book one even though it was more difficult to read because of the intense emotions. Now I am more than anxious to get the next books and learn what happens to the men and women of Unit 14 and to see the implementation of Archer’s plans to rein in Thoor's Machine.


I received this book from iReads for an honest review during blog tour. Please see my review of Book One, Dawn of Destiny, and the GIVEAWAY linked there.
Where to buy the book:
Amazon
Barnes & Noble

Born and raised in Cajun country, Lee Stephen spent his childhood paddling pirogues through the marshes of South Louisiana. When he wasn’t catching bullfrogs or playing with alligators in the bathtub (both true), he was escaping to the world of the imagination, creating worlds in his mind filled with strange creatures and epic journeys. This hasn’t stopped.

Now a resident of Luling, Louisiana, Lee spends time every day delving into the world of Epic, the science-fiction series that has come to define him as a writer and producer. Alongside his wife, Lindsey, their sons, Levi and Lawson, and their dog, Jake, Lee has made it a mission to create a series that is unique in its genre—one unafraid to address the human condition while staying grounded in elements of faith.
Connect with Lee:  Website  ~  Twitter  ~  Facebook
Posted by Martha Eskuchen at 5:30 AM