I enjoyed the overall story even though there are flaws.
The Tempting of Thomas Carrick: The Cynster Novels, Book 21
Written by: Stephanie Laurens
Narrated by: Matthew Brenher 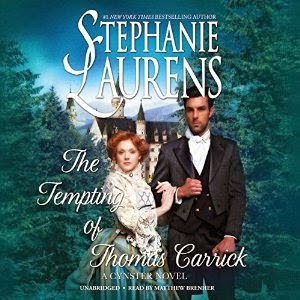 Publisher's Summary
What happens when fate, love, and passion collide?
The number one New York Times best-selling author Stephanie Laurens returns to Scotland with a tale of two lovers irrevocably linked by destiny and passion.
Thomas Carrick is a gentleman driven to control all aspects of his life. As the wealthy owner of Carrick Enterprises, located in bustling Glasgow, he is one of that city's most eligible bachelors and fully intends to select an appropriate wife from the many young ladies paraded before him. He wants to take that necessary next step along his self-determined path, yet no young lady captures his eye, much less his attention - not in the way Lucilla Cynster does, even though she lives miles away.
For over two years, Thomas has avoided his clan's estate because it borders Lucilla's home, but disturbing reports from his clansmen force him to return to the countryside - only to discover that his uncle, the laird, is ailing, a clan family is desperately ill, and the clan healer is unconscious and dying. Duty to the clan leaves Thomas no choice but to seek help from the last woman he wants to face.
Strong-willed and passionate, Lucilla has been waiting - increasingly impatient - for Thomas to return and claim his rightful place by her side. She knows he is hers - her fated lover, husband, protector, and mate. He is the only man for her, just as she is his one true love. And, at last, he's back. Even though his returning wasn't on her account, Lucilla is willing to seize whatever chance fate hands her.
Thomas can never forget Lucilla, much less the connection that seethes between them, but to marry her would mean embracing a life he's adamant he does not want.
Lucilla sees that Thomas has yet to accept the inevitability of their union. But how can he ignore a bond such as theirs - one so much stronger than reason?
©2015 Savdek Management Proprietary Limited (P)2015 Blackstone Audio, Inc.

Lucilla has been waiting for Thomas to return to the area and now that he is here she realizes she must use every temptation she can to get him to stay, even if it means outright seduction and disregard for his plans. Thomas resists giving in to his physical needs but his attraction to Lucilla is undeniable. Even if he finally succumbs to her persistent attentions, he has no intention of submitting to some fate, or Lady of the Vale, that he cannot control.

I liked the mystery that opens and closes the book although I felt there were loose ends. The plot in between focuses on the romance and conflicts of interest between the main characters. The romance scenes are sensual and nicely done, if a bit long winded for my tastes. It did bother me that there was no regard for the consequences of their intimacy. I found this unrealistic for the times as well as making Thomas to be a man of little honor.

I read the beginning books in this series many years ago and have a collection on my TBR shelves. I was pleased to find Ms. Laurens’ writing style still includes strong, well developed characters and an engaging romance. There is a point late in the story that brings the Cynster family together and I was glad to recognize several characters from the early books. There are details of other characters left open at the end that imply a future story for another Cynster character.

This is clearly part of a long family series, but I don't feel it would be necessary to read the earlier books. Reading book 3, Scandal's Bride would provide the story of Lucilla's parents. I would not want a steady diet of this type of romance but I am comfortable recommending this story, and this author, to readers who enjoy a sensual, character centered historical romance.

Audio Notes: You don’t generically think of romance as being suited for male narration. However, much of this story is told from Thomas’ view so it fit. Matthew Brenher does a fine job with both the voices, accents and emotions of the characters. My engagement in the story was enhanced by the audio.


I selected this title from Blackstone Audio through Audiobook Jukebox. This adds to my Audio Book Challenge.
Posted by Martha Eskuchen at 11:08 PM