This is a thought provoking dystopian story with engaging plot twists.
The Ark
by Laura Liddell Nolen 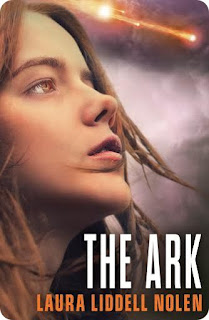 
There’s a meteor headed for Earth, and there is only one way to survive.
It’s the final days of earth, and sixteen-year-old Char is right where she belongs: in prison. With her criminal record, she doesn’t qualify for a place on an Ark, one of the five massive bioships designed to protect earth’s survivors during the meteor strike that looks set to destroy the planet. Only a select few will be saved – like her mom, dad, and brother – all of whom have long since turned their backs on Char.
If she ever wants to redeem herself, Char must use all the tricks of the trade to swindle her way into outer space, where she hopes to reunite with her family, regardless of whether they actually ever want to see her again, or not . . .


Review:
Char felt abandoned at home and, as a rebellious pre-teen, she took up with a bad group of kids. She pushed her beloved younger brother away so he wouldn’t follow in her thieving footsteps. She tried to break away but her cohorts trapped her in the last robbery. Of course, noone would believe her and, at the age of sixteen, she is on her third time in Juvenile prison. The bigger problem is that no prisoners will be allowed a starpass to enter the Ark.

A meteor is headed toward Earth. Five Arks have been built to take selective groups from five nations into space to recolonize. Important people in leadership and specialized fields, like medicine, are guaranteed a spot. Others from age appropriate (under 40), healthy citizens have been selected by lottery.

Char unexpectedly finds herself in possession of a starpass. She seeks help from a special prisoner, Isaiah, who is called ‘the mole’ due to his blindness. She persuades him to help her escape. They become separated but she finally makes it to the Ark and a young security officer helps her enter at the last minute. Char desperately wants to see her family but she fears they will not welcome her.

Once on board Char is exposed as a stowaway and goes on the run and into hiding. She discovers surprising allies and experiences (yet again) painful betrayals. The disturbing secrets she discovers could change life, not only for her but, for everyone onboard the Ark.

Char is a complex character, whose spirit of rebellion was difficult for me to embrace. I had to remind myself more than once that she is just a young, confused and emotionally hurt girl. I would have appreciated Char’s stealthy skills if they were used for good and they do come in handy in helping her reach the Ark and survive once there. I also liked Isaiah’s intensely brilliant leadership skills although he too is a difficult character to fully like.

The author makes a good point about how we view rules: some believe rules are made to “protect us”, while others recognize some rules often “only protect a small group”. I initially had trouble getting into the story/characters. However, once I hit 30% I couldn’t put it down. There is a distinct blurriness to lines of good and evil. There is certainly bleakness in the story – especially to the extent that corruption is going with those destined to build a new world– but there is a message of hope too. I recommend this story as a good dystopian experience.


I received this ebook from Pump Up Your Book tour for an honest review. 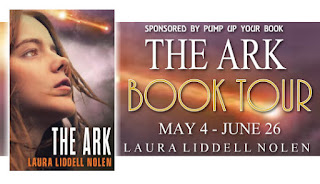 Laura Liddell Nolen grew up in Hattiesburg, Mississippi, where she spent lots of time playing make-believe with her two younger brothers. They supplemented their own stories with a steady diet of space- and superhero-themed movies, books, and television. The daughter of a comic book collector, she learned how to handle old comics at an early age, a skill she’s inordinately proud of to this day.

Laura began work on her first novel, The Ark, in 2012, following the birth of her daughter Ava, a tiny rebel and a sweetheart on whom the novel’s main character is loosely based. Completion of The Ark was made possible in part due to an SCBWI Work-in-Progress Award.

Laura loves coffee, dogs, and making lists. She has a degree in French and a license to practice law, but both are frozen in carbonite at present. She lives in Houston, Texas, with her husband and two young children, and their dog Miley, who is a very good girl.
For More Information:
Visit Laura Liddell Nolen’s website.
Connect with Laura on Facebook and Twitter.
Find out more about Laura at Goodreads.
Visit Laura’s blog.