I enjoyed this engaging story with its well developed characters and solid action. 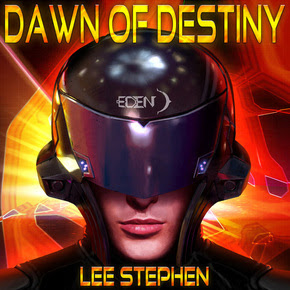 Genre: Sci-fi
Publisher: Stone Aside Publishing, L.L.C.
Published: October 2014
Available in: Mp3
Length: 9 hours, 47 mins
Available in: Print, ebook (mobi for Kindle and ePub) and audiobook (full cast with cinematic sound effects - see more description below)
Content Rating: PG-13 for violence and depictions of war. There is no profanity, sexual content, or drug use.
My Rating: 4.75 of 5.0

Book Description
Publication Date: November 4, 2006
Some men go to war for the glory. Some men go to war to escape. For Scott Remington, war is entirely different. It is a belief. It is a calling. It is a destiny. Leaving everything behind-his fiancée, his future, his life-he embarks on a mission of faith into a battle he can barely understand. This is his story. This is his war. This is only the beginning.


Review:
Scott Remington is a Christian young man who has a natural talent for leadership. He did well at the Philadelphia Academy training to be a new soldier for EDEN, the Earth Defense Network. Even though the soldiers are well trained and learn about the alien creatures that are now invading earth, it isn’t the same as suddenly being thrust into the fight and facing live enemies.

Scott applies for assignment to Detroit where his young fiancé, Nicole, is in nursing school. Instead he is sent to Richmond, VA where he meets new friends. David is the eldest, a fourteen year old New York Police officer. Becan is a brash, cocky Irishman. Jayden is a quiet young Texan who is the respected sniper of the group. Scott and the other rookies are assigned to the top unit, the Falcon Platoon. Their commander is less than pleased to be given alpha level privates but they are the only troops available especially after Falcon lost all but three of its members in the last engagement at Cleveland.

The platoon is called out with others to face the purple, eye-bulging Bakma in Chicago. Scott steps into command when his unit leader falls and leads the team to complete a successful mission. The men respect Scott’s quick, calm authority.

Scott’s actions result in his becoming the youngest soldier to be awarded the rare and prestigious Golden Lion medal. Although the press makes a fuss, Scott accepts the honor humbly, sharing credit with others.

The four friends face other enemies and their versatility and successes cause them to be reassigned to Novosibirsk, Russia. The Russian base is under the command of the famed, brutal General Thoor who leads the mysterious Russian unit known as the Nightmen. These are all fierce, highly trained soldiers and rumor has it the initiation price is murder.

Scott and his friends are assigned to unit 14 where they build new friendships and face more serious dangers. There are painful losses even before the troops face a major stealth attack on their base. Scott again gains respect with his fast, decisive actions.

I really enjoyed the fierce and fast paced battle scenes. I also liked how Mr. Stephen’s develops the characters and builds their friendships. The story is not just war but it includes personal interactions that add interest. I appreciated the faith foundation of Scott’s character yet the story does not have religious preaching that might put off some readers. I was also impressed that the author deals in intense situations without resorting to unnecessary swearing. Finishing the first book left me anxious to jump right into the next one.

Audio Notes: The audiobook is a dramatization with background sounds fitting the scenes. The production is well done making the action come alive. The only drawback was the spacing and music at the end of chapters is left a bit longer than necessary. I definitely enjoyed the audio version and recommend it to those who enjoy a full, surround sound experience.


I received this in Audiobook from iRead Book Tours to provide an honest review. This qualifies for my Audiobook Challenge.

The Audiobook:
The Dawn of Destiny audiobook project is a full adaptation of the first book in the Epic series. It's not your typical “audiobook,” even though technically that's what it is. When people hear “audiobook,” there’s a certain type of thing that usually comes to mind. Most likely it’s the thought of someone reading a book to them, occasionally with music playing in the background. This isn't that.

What you’re going to hear in this project, is more of an audio “experience,” the audio equivalent of a summer blockbuster movie. Over thirty voice actors played a role in this. This is ear-splitting sound effects, bombastic music, and characters shouting back and forth in the middle of a war zone. This is unlike anything you've ever heard.


Where to buy the book:
Amazon
Barnes & Noble

Author's Bio:
Born and raised in Cajun country, Lee Stephen spent his childhood paddling pirogues through the marshes of South Louisiana. When he wasn’t catching bullfrogs or playing with alligators in the bathtub (both true), he was escaping to the world of the imagination, creating worlds in his mind filled with strange creatures and epic journeys. This hasn’t stopped.

Now a resident of Luling, Louisiana, Lee spends time every day delving into the world of Epic, the science-fiction series that has come to define him as a writer and producer. Alongside his wife, Lindsey, their sons, Levi and Lawson, and their dog, Jake, Lee has made it a mission to create a series that is unique in its genre—one unafraid to address the human condition while staying grounded in elements of faith.

For additional information visit the blog tour page at iRead Book Tours.
Posted by Martha Eskuchen at 5:30 AM