This is a gripping thriller written with wonderful rich, surprising prose.
Monday's Lie
by Jamie Mason 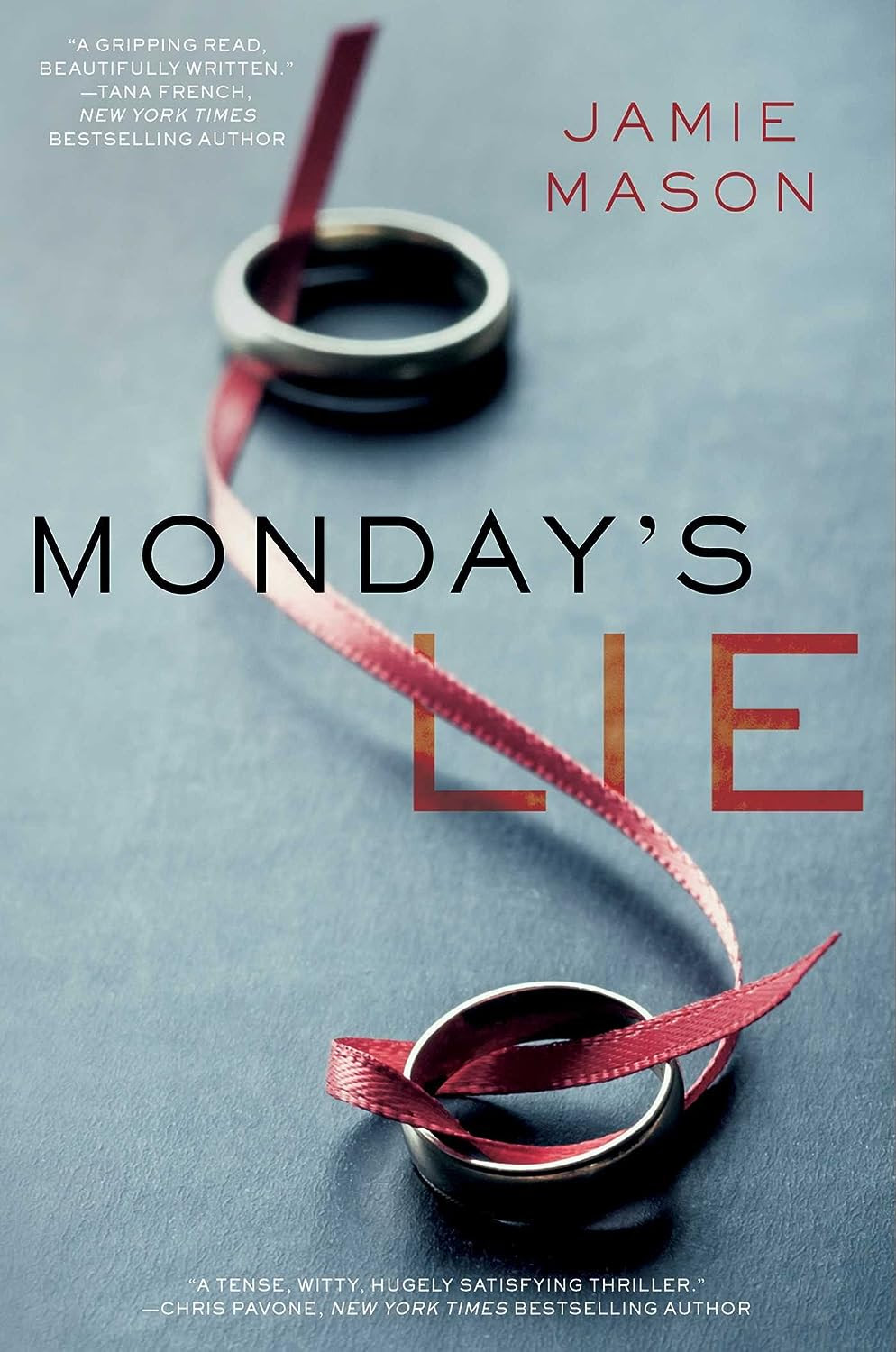 Book Description
Publication Date: February 3, 2015
From the acclaimed author of the “ripping good” (The New York Times) debut novel Three Graves Full comes a new thriller about a woman who digs into her unconventional past to confirm what she suspects: her husband isn't what she thought he was.
Dee Aldrich rebelled against her off-center upbringing when she married the most conventional man she could imagine: Patrick, her college sweetheart. But now, years later, her marriage is falling apart and she’s starting to believe that her husband has his eye on a new life...a life without her, one way or another.
Haunted by memories of her late mother Annette, a former covert operations asset, Dee reaches back into her childhood to resurrect her mother’s lessons and the “spy games” they played together, in which Dee learned memory tricks and, most importantly, how and when to lie. But just as she begins determining the course of the future, she makes a discovery that will change her life: her mother left her a lot of money and her own husband seems to know more about it than Dee does. Now, before it’s too late, she must investigate her suspicions and untangle conspiracy from coincidence, using her mother’s advice to steer her through the blind spots. The trick, in the end, will be in deciding if a “normal life” is really what she wants at all.
With pulse-pounding prose and atmospheric settings, Monday’s Lie is a thriller that delivers more of the “Hitchcockian menace” (Peter Straub) that made Three Graves Full a critical hit. For fans of the Coen brothers or Gillian Flynn, this is a book you won’t want to miss.


Review:
Dee had an interesting childhood being raised by a mother, Annette, who had a mysterious career. Annette taught Dee and her brother, Simon, life lessons through “spy games" including observation, memory tricks, defensive training and puzzle solving. Dee’s character and future were impacted by an event when she was 13 and strangers appeared in the middle of night. Annette sent Dee and Simon outside with specific instructions to either return or run, depending on the signals. Dee and Simon watched their mother leave that night as their aunt and mother’s friend, “Uncle” Paul, stepped in to care for the kids for months.

Dee was intent on leading a “normal” life and she married Paul right after college. They began their normal life with a small apartment and two regular careers. Dee and Paul were in their own home when Annette moved in during the last months of her battle with cancer. Paul seemed to love Annette and the stories and mystery that were her forte.

After a few more years Paul and Dee are growing apart when Dee learns she has inherited a significant fortune from her mother. Dee isn’t sure what the problem is with her marriage but she is certain there is one. Betrayal and secrets lead to suspicions. The problems and evidence compel Dee to search out the full extent of the secrets before it is too late. She realizes that she must use the skills her mother taught her, with her own strong instincts, also realizing that maybe “normal” isn’t all it’s cracked up to be.

The first thing I noticed in this story is the wonderfully rich prose of the writing which is not the normal for a mystery novel. I liked the technique of moving in time to fill in back-story and arrive at present events. Dee and Simon are both unusual characters with distinct features, and the author provides rather strange thought processes for Dee. ("I stalk myself through the flashing memory of my life.") As the story developed, the suspense and mystery were gripping. Initially the tension built slowly, but as the end drew nearer I did not want to put the book down. I noted that the story was simpler, but also more clever, than at first it seemed. There is just a hint at a new interest for Dee which might be developed if this is the beginning of a series.

I highly recommend this to readers who like a good suspense thriller. I would like to read more by Ms. Mason.


I picked this up on Netgalley. It qualifies for NetGalley Challenge and M on Alphabet Soup.
Posted by Martha Eskuchen at 5:30 AM