This is an engaging mystery with a dysfunction heroine.

Book Description
Publication Date: August 25, 2014
With a contrary attitude and an addiction for independence, Lillian Dove admits she has not been a success in life. In fact, she considers failing as one of her addictions. Yet, when she comes across a suspicious house fire with a history of arson and murder, she instinctively attempts to help someone trapped. Lillian becomes the only possible eyewitness to criminal arson, and her life begins to spiral out of control.
Lillian Dove is an endearing “everywoman” struggling with life issues, emotional complexities and a habit of doing just the opposite of what she’s told to do. These qualities in a heroine give the reader an ability to vicariously struggle along with the protagonist in this intriguing Midwest Noir mystery.


Review:
Lillian Dove has not had a very happy life. Lillian resents her mother for keeping the family in its situation with an alcoholic and abusive father and burdening young Lillian with the care of two younger brothers. As soon as she could, Lillian escaped home but her life spiraled into alcohol until she pulled herself out fifteen years later.

Lillian moved to a new town to start a life away from her past. Now, as a reconveying alcoholic, she struggles to make ends meet with two jobs: a dispatcher for the police and a clerk in a local liquor store. She wishes for a “normal” life with a boyfriend to love.

Lillian drives by and sees a house on fire. After calling it in she tries to rescue someone she spotted in an upstairs window. She tumbles into the bedroom and has to be rescued herself. The rescuing fireman claims there was no evidence of anyone else in the house.

A few days later Lillian calls in a break-in at her condominium but, again, the arriving police say there is no evidence of anyone there. She spots a mean man threatening her mother at the nearby living facility and begins to believe that man is responsible. Lillian continues to try to solve the arson case even while being mocked by the police department.

I found the beginning of this book a bit difficult as Lillian is not a happy character and it was unusual to have an unlucky, codependent, dysfunctional heroine. However I appreciated her determination and eventually was engaged by the mystery and the mayhem. I felt there were some character involvements that were not completely explained and the ending, after the mystery was solved, was a bit abrupt. Yet, I was engaged enough by the town characters that I read on into the excerpt of the next book, wanting to know more of what happens and hoping for better things for Lillian.

The writing flowed well and read fairly quickly. I recommend this to anyone who enjoys a good mystery and especially to readers who like small town settings with different character personalities.


I received this ebook for an honest review as part of Pump Up Your Book Tour. 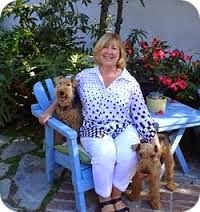 D. J. Adamson is an award-winning author. Her family roots grow deep in the and it is here she sets much of her work. She juggles her time between her own desk and teaching writing to others at two area colleges. Along with her husband and two Welsh Terriers, she makes her home in .
Her latest book is the mystery, amateur sleuth, Admit to Mayhem.
For More Information


My name is Lillian Dove. I am a recovering alcoholic, five years sober.
Five long years, yet the clink of ice in a glass still sets me on edge.
There is no graduation from alcoholism. Or life, for that matter. I am also addicted to Pepsi, chocolate, men, being afraid, being afraid of not being afraid, men—again--and my independence, co-dependence and unsettling ability to fail no matter my attempt. There are other compulsions and bad habits, but I can’t think of them right now. Memory loss, see? And I obsess on how much I forget, if I remember. Giving up alcohol turned out to be easier than changing some of my other behaviors.
Especially my bad judgment when it comes to men. The type of man I’m most attracted to is like a tall, Tom Collins on a sweltering, summer day:  gin, a little lemon--but not too sour—with sweet syrup and bubbly soda.  It’s hard to resist, even if I know it’s not good for me.
I’ve pledged a Tom-Collins-abstinence.
Yet, Chief Charles Kaefring began offering me his attention. I thought my sobriety realigned my sexual magnetism. I was attracting a different type.
He started coming to my desk to tell me he was leaving and instructed me to send all his calls to his assistant. At first I couldn’t figure out why he thought I needed this instruction. I already transferred his calls as a manner of routine. Then a week after making sure I was aware of his whereabouts, I bumped into him lakeside at Louise’s Italian Kitchen.
Louise’s is my Friday night routine. I celebrate making it through another week.  One spaghetti dinner at a time.
After that Friday night, I saw him at Louise’s every week. If he got there before me, I’d see him glancing toward the entry as if waiting for me to arrive. If I got there first, I’d pretend I never expected him to show up--which was the truth. Each and every time he arrived, I was flabbergasted.
I wasn’t sure what was starting up between the two of us or who started it. I mean, how could a man like him seriously be interested in me?
And even after weeks came and went, I still didn’t trust him. At each dinner he’d ask if I’d like wine with my meal. “Of course,” I’d say, letting my glass set without drinking it. If he worried the wine wasn’t good, I’d bring the glass to my lips, without sipping. I figured if he knew I had a drinking problem, he’d beat the hell out of there. Eventually though, he stopped asking if I wanted wine and only ordered one glass instead of two.
Still, he kept showing up.
I knew I was starting to slip into a situation that could toss my sobriety into the toilet, but meeting for dinner didn’t seem like backsliding into emotional drunkenness. Although, it never feels like slipping until you find yourself in a ragged heap of discontent.


Our routine altered when on a Sunday afternoon he telephoned giving me a weather report. He said the day was hot and getting hotter. He said he was putting a steak on the barbecue, and he just happened to have two.  Are you hungry?
Posted by Martha Eskuchen at 5:30 AM