This is a very light and easy listen.
Finding Mr. Right
Written by: Emily Carmichael
Narrated by: Barbara Rosenblat 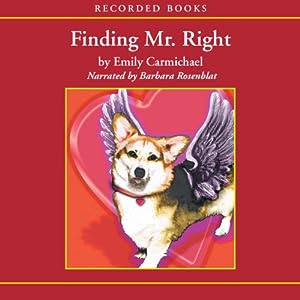 Publisher's Summary
Finding Mr. Right is a heartwarming tale for romantics and animal lovers. Amy Cameron has had a run of incredibly bad luck. Her husband and best friend are murdered, together, because they were having an affair - then her house burns to the ground!
The last thing Amy needs is another man. But her deceased, traitorous, gal-pal is sent back to Earth to make up for her indiscretion and find Mr. Right for Amy. The only catch - she comes back as a ratty, little Welsh Corgi named Miss Piggy.
©1998 Emily Krokosz; (P)2001 Recorded Books, LLC


Review:
Amy is a nice woman who made the mistake of marrying and relying on the wrong man. It is hard enough to discover that your husband has been murdered, but even worse to learn he was with your best friend who was a female version of a ‘tom cat’. Things look bleak for Amy when her house burns down a short time later.

Amy is trying to recover from the pain of betrayal and loss. She is focused on making her own living as a freelance photographer, and rescuing an abandoned Welsh Corgi, rather than finding a man. She knows this newly rescued dog, dubbed Miss Piggy, has some strangely human mannerisms but she has no way of knowing that the dog is her traitorous best friend sent back to help Amy find “Mr. Right”.

Jeff is a veterinarian who has a laid back practice and enjoys volunteering at the local shelter. When Amy arrives at the shelter to foster a dog he is immediately interested in the understatedly attractive widow. He continues to make efforts to see Amy even with interference from the dog with rather strange behaviors.

Miss Piggy, who speaks in first person as Amy’s deceased friend, Lydia, has been assigned the task of finding the right new husband for Amy. Although disgruntled with the task, Lydia realizes that she must do her best or she may be stuck in this doggie body forever. Lydia doesn’t see any potential in Jeff with whom she had one boring date. Instead Lydia champions the interest of a successful, handsome, TV reporter who was a friend of Amy’s cheating husband.

This is a really fun story and easy listen. I enjoyed Jeff’s persistence to show Amy he would be a good and secure companion, unlike her first husband. I like how Amy’s character was able to grow beyond her past and the demeaning husband to expect more. I also enjoyed the mystery as it developed. Even though it was fairly obvious, it was still fun to watch Amy as she stepped into danger before completely piecing together all the connections.

The writing is solid and the switch from third person view to first person is well done and effectively used. The story is light and the dog view adds humor. Readers should be in the mood for light mystery and fun instead of expecting any great literature or thriller. I was in the right mood and would enjoy another book by this author when looking for a book of similar easy and light entertainment.

Audio Notes: I will admit that when I first stared listening I wasn’t sure if I would like the narration. Once I accepted that the narration fit well with Lydia’s selfish view of life it flowed well. I would be willing to try other audio books narrated by Barbara Rosenblat.


This book was from my own Audible Library as a selection from 11/2012. This qualifies for my Audio Book Challenge, the TBR Double Dog Dare and F in my Alphabet Challenge.
Posted by Martha Eskuchen at 6:30 AM