Book Review and Giveaways: Sealing the Deal (The Ladies Who Lunch) by Sandy James

This is a delightful sweet and sensual romance with natural characters.

Sealing the Deal (The Ladies Who Lunch)
by Sandy James 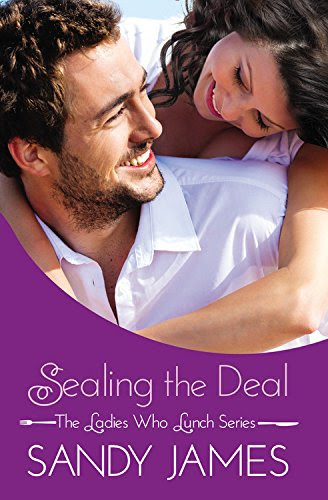 Book Description
Publication Date: November 4, 2014
(Forever Yours E-Book; $2.99)
After losing her sister, Bethany Rogers needs a shoulder to lean on more than ever-though she never expects that shoulder to belong to her new boss . . .

Bethany has been in love with Robert Ashford since they were teachers at the same high school. After Robert leaves to start his own construction company, Beth puts her feelings aside to focus on her goals. When she finally lands a gig as a part-time designer, she is shocked to find her new boss is none other than Robert . . . and he's hotter than ever. But Bethany's happiness is short-lived when she receives word that her sister has been killed in combat.

With the success of building homes for one happy family after another, Robert is finally ready to settle down. When Beth is left to care for her nine-month-old niece, Robert can't help but step in. And before long, the trio are inseparable. Yet convincing the cautious, bereaved Beth of letting him in proves difficult-but Robert will give everything he's got for the chance at his own happily ever after.


Review:
Beth is a thirty-two year old teacher who has had a secret crush on her part-time boss, Robert, who used to be a teacher too before he started his own construction company. Beth has worked for Robert by putting the important designing touches on his homes. Beth is a buoyant personality but a lot of her bounce is to hide the insecurities that were ground into her by her critical mother. As a comfortable size 14 woman, Beth is convinced that Robert wouldn’t be interested in her since he plays the field with tall, svelte blondes.

Robert is an independent, successful business man and has come to a point where he is ready to settle down. He has often felt unloved even though he overcame a difficult childhood of stuttering. Robert and Beth have been friends for a number of years but he wishes for more.

Beth’s sister is killed in the service and Beth suddenly has to care for her infant niece, Emma. Robert decides that helping with adorable Emma is a good reason to get closer to Beth. He offers them a new home and hopes that now he will have the courage to show her, if not tell her, how he feels.

Beth and Robert are both fragile and reluctant to risk their hearts by expressing their feelings. They grow closer and even begin a sexual relationship but there is much confusion and misunderstanding regarding their motives. They both think that adopting Emma is the real reason for their own affections. When Emma’s natural father seeks full custody Beth and Robert will need to decide if they can accept each other and stand together or if they will separate without realizing the love they could share.

Ms. James does a wonderful job of developing strong, likable characters and setting out a believable, natural story. She succeeds again in this story and I liked that the lead characters are very natural and not perfect. Emma adds a cuddleable interest and Beth’s three friends, the Ladies who Lunch, are good secondary characters. The romance encounters are sensual and bold with a playful and loving bond, even though their feelings are conflicted. The story is engaging and the writing flows for an easy read.

I have enjoyed reading Ms. James before and will be glad to read more in the future. This book is part of a series and made me want to read the stories for the other friends in the ‘ladies who lunch’ group. I recommend this book and this author to readers who enjoy warm, contemporary romance.

About the author:
Sandy James lives in a quiet suburb of Indianapolis with her husband. She's a high school social studies teacher who especially loves psychology and United States history. Since she and her husband own a small stable of harness racehorses, they often spend time together at the two Indiana racetracks.


“Why does everyone think I can’t raise Emma?”
“Everyone?”
She looked so damned forlorn. “Jules. My parents. You.”
With a shake of his head, he tried to set her straight. “First off, I have never—I repeat never—said you can’t raise Emma. In fact, I think you’re doing a fantastic job with her.” He glanced at the munchkin. “Look at her.” Emma smiled on cue, all tiny teeth and drool. “She’s doing really well with you. What did your parents say?”
Beth’s pouty lips strongly tempted him to kiss her again. “They told me it might be better to put her up for adoption.”
“Are you serious?” What kind of grandparents would say something so cruel? How could they even consider giving up their only grandchild?
“Dead serious. They made such a fuss over how much taking care of her while Tiffany was gone inconvenienced them. I was going to take her this summer, maybe even longer.”
What did a person say to something like that? “That’s cold.”
“I know, right? Besides that, my folks are really old-fashioned. They think a child should have both a mom and a dad.” A smile threatened. “I think Tiffany had Emma as a way to piss Mom off. Kind of her way of saying, ‘I’m a single mom. Take that, Carol.’ ”
“They’re wrong. You know they are.”
Although she glanced away, he saw the hurt in her eyes. “They’ve never really had a lot of confidence in me.”
Since his parents always encouraged their gaggle of children to reach for the stars and told them they all had the ability to do just that, he had a hard time picturing what it must have been like to grow up with parents like Beth’s. “Then they’re not too smart, ’cause you’re somebody who deserves their confidence. You’re amazing.”
Her gaze came back to his, but there was disbelief in her eyes.
“I mean it, B. Look at all you’ve done at school. Everyone admires you.”
She gave him a small snort.
One thing he’d have to do when they lived together was help give her more self-esteem. But he had to convince her to move into this house with him first. “What did our ever-tactful Jules have to say?”
“It was wrong to tell you she said I wasn’t good with Emma.”
“She didn’t say that?” Robert asked. He still stood in front of Beth, and now he held both her hands in his. It felt so natural. So right. Like two people in love sharing a conversation.
But Beth didn’t love him, and he was still pretty mixed up about how he felt about her. That was why he thought she and Emma moving in would be so great. He would have Emma in his life, and he and Beth would have time to share their lives, to see if the kisses and caresses led to—or away from—something special.
Beth shook her head. “She got weird when I asked if her nanny could watch Emma when I go back to work next week.”
“You’re going back so soon?”
This time, she nodded. “I’m out of paid time off.”
“Why not take a leave of absence?”
Her laugh was always so sweet to his ears. “ ’Cause I like to eat, and I imagine Emma does, too.”
“Didn’t Tiffany have life insurance? I thought all soldiers did.”
“I won’t touch that money. Not unless I absolutely have to. It’s a nest egg for Emma. She can pay for college and maybe even buy her first home with it.”
The response was pure Beth. Always putting others before herself. She was going to raise that baby on a teacher’s salary, a salary that seldom saw increases. She’d have her work cut out for her being a single mom who got paid diddly-squat.
“Well, then,” Robert said. “That seals the deal. You move in here. There’s one less expense.” She had to agree. She just had to.
“I’d pay you rent,” she insisted.
“The hell you will!”
She jerked her hands free. “I’m not a charity case, Robert. Emma and I aren’t living in a homeless shelter or anything. I already told you Jules is looking for a house for us.”
Why had everything he said in this conversation come out wrong? After raking his fingers through his hair, he tried again. “B, p-please. Please move in with me. I want Emma here. I want you here.”
“Why?”
A man could only take so much provocation. Her belligerent frown that wouldn’t scare a fly. Her brown eyes that flashed with fire. The way she crossed her arms under her full breasts. Everything about her made him want to kiss her.
So he did.
Robert grabbed her hand and tugged Beth into his arms. He stopped when his lips were almost touching hers. “Because of… this.”

BONUS GIVEAWAY
In addition to the Rafflecopter giveaway I get to give One Winner at this blog an ecopy of Sealing the Deal from the publisher through NetGalley.


ENTRY FORM HERE
(Don't forget to fill in the form for entry!
I have noticed a few commenters who forgot to enter through the Form.)
For 3 Extra Bonus entries comment on this review, OR
visit THE AUTHOR'S Website and tell me something you like/learned there.

* This contest is open US and Canada Only.
* This contest will close 10 PM (Central) November 14, 2014.
Winners are asked to respond, within 72 hours, by email or the winners form linked in the announcement.
Posted by Martha Eskuchen at 5:30 AM