Book Review: Sonata for a Scoundrel by Anthea Lawson

This is an engaging story with lovely prose.
Sonata for a Scoundrel
by Anthea Lawson 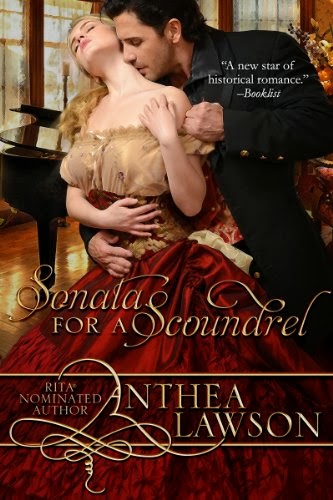 Book Description
Publication Date: November 12, 2013
* 2014 RITA Award Finalist!*
The Muse...
Clara Becker is a supremely gifted composer - a talent of little to use to a woman in 1830s Europe. Her compositions only have worth when they are published under her brother's name, yet this deception barely enables them to scrape out a living in the poorest quarter of London.

Meets the Master...
Darien Reynard, the most celebrated musician in Europe, pursues success with a single-minded intensity. When he comes across Becker's compositions, he knows that this music will secure his place in history. Darien tracks the composer down and, with some difficulty, convinces the man to tour with him. Mr. Becker agrees, but with the most unusual condition that he bring along his sister...

Set against the glittering backdrop of 19th century celebrity, Sonata for a Scoundrel is the newest full-length historical romance novel from RITA-nominated author Anthea Lawson.


Review:
Clara Becker composes beautiful music but has to publish it under the name of her brother, Nicolas. Only her brother and their father know the truth. Even the composition sales are not enough as they struggle to pay bills.

Then the “maestro”, Darien Reynard, the premier violin musician in Europe, seeks out Becker. He is intent on having the composer collaborate with him on tour and in preparation of an upcoming music duel. Darien is preparing to face another violinist who wants to claim the position and title of Maestro. Darien makes a financially tempting offer but Nicholas has to insist on his sister coming along on the tour.

Nicholas is a gifted pianist but finds it difficult to hide behind his sister. They know they must keep up the pretext or it would be disaster for all of them. He is distressed that some of the new compositions are more emotional than most men might write and Darien’s rival makes a point of belittling them. The pressure of the tour and secrets weigh heavily on him and feed his tendency towards depression, or melancholy as they term it.

Darien is drawn to beautiful Clara but Nicholas has made it clear that he must not dally with her or the Beckers will leave the tour. Darien spends weeks trying to ignore her. One night Nicholas fails to appear for a performance and Darien learns that Clara plays with even more emotion than Nicholas. There is a special and powerful blending of energy and music when they play together.

As the date of the musical duel draws near Nicholas drinks more and becomes more distressed and fragile. Darien and Clara work together more and begin to see each other in secret. Darien begins to suspect there is more to Clara’s musical abilities than the siblings are sharing. Can Clara help keep Nicholas on track for the most important night of Darien’s career? What will happen to Clara after the duel is over?

The characters are well developed and the tensions are natural in the storyline. This writing contains wonderful prose, including phrases that fit with the musical theme.


Instead he studied her as though she were an unexpected dissonance in the score of his life; different, possibly unpleasant, yet unmistakably interesting. Location 718.

The musical theme and touring creates a lovely, rich backdrop to the romance. The romantic encounters were a bit drawn out but the rest of the story makes it worthwhile. I thoroughly enjoyed this engaging story to its triumphant ending. I also liked the informative author’s notes. I recommend this to readers who like strong romance set in an interesting historical time and circumstance.


I received this as part of a review bundle from Story Bundle - check out the deals available 4/30 to 5/21.
Posted by Martha Eskuchen at 5:30 AM