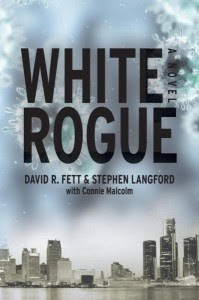 Book Description
Publication Date: October 8, 2013
After Boston experiences a seemingly inexplicable bio-terrorist attack, the Center for Disease Control's Dr. Dave Richards and Federal Bureau of Investigation Special Agent Paula Mushari once again join forces to uncover who is behind it. An obscure reference to a Dresden project found amid crash site evidence marks them both for execution. Paula and Dave are forced to leave Boston in the middle of the night and head to Washington, D.C., where they soon find that anyone they contact also becomes a target of assassins. When the daughter of the CDC's director is taken hostage, Dave and Paula come face to face with an evil that forces them to question the very nature of duty and service to country. With the help of one man, they learn the true meaning of dark operatives as they desperately try to determine the where and when for the next strike against the United States.


Review:
Dr. Dave Richards, an investigator for the Center for Disease Control (CDC), gained a reputation when his efforts helped take down a terrorist group in the White Sleeper case. During that case he met FBI Special Agent Paula Mushari and their friendship has grown even though they are based in different cities.

Dave is called to a community on the Jersey Shore when a man is diagnosed with illness related to the biochemical MRSA virus. Dave is able to track the source of contact but not how it came to be there which leaves him unsettled. His next assignment sends him to the jungle of Columbia where a remote community is suffering from unexplained stomach cancers. Dave and other doctors sweat in the heat and frustration until he solves the source of that contamination too.

Dave and Paula have planned a romantic getaway to Costa Rico but before he can fly out he gets a call from Paula to fly to Boston instead. There has been another serious MRSA breakout that appears to have been a deliberate act of sabotage. The bad, icy roads give them a break in the case when the man who delivered the virus crashes. They are able to find evidence in his car, including a cell phone with a text that mentions a ‘Dresden Project’.

The tank that carried the virus is sent with Hazmet suited troopers to be delivered to MIT for further handling and testing. It never arrives and the troopers are found shot dead in the police car. Apparently someone is trying to cover their tracks and will take out anyone with knowledge they deem risky. Dave and Paula become targets and are only spared assassination by the intervention of an old friend, CIA operative Mr. Smith. Mr. Smith suspects that the Dresden Project is being implemented by a rogue group of contacts attached to government agencies. Since he is too close to the situation to step in himself he directs Dave and Paula to chase down witnesses. The two keep arriving to find dead bodies until finally clues lead them to a suspected biochemical attack on a Muslim community. It becomes a race against time to stop the attack and uncover the perpetrators.

I liked the idea of a CDC character which I think provides good opportunities for stories as shown by the diversity in the plot events. I enjoyed how the authors wove the personal lives of the characters into the story as the intrigues developed and escalated. There are several secondary and peripheral characters who add interest, like Mr. Smith and a contract agent, Geneva Scott. (Check out the character interview post.) The story is fast paced and interest is maintained by alternating chapters between the main characters and secondary people and events that are being manipulated or impacted.

Although Dave and Paula are introduced in a first book, this reads fine as a stand alone. I found the writing a little simplistic and there were some events that had a pretty thin tie to the main intrigue.  Also it seemed unlikely that the rogue group would fail to pursue Dave and Paula after the first missed attempt. Still, this was a satisfactory read and should be a good fit for those who want an easily read thriller.

I received this book for review as part of Pump Up Your Book Blog Tour. 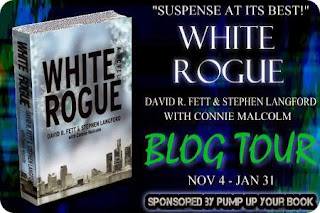 ENTER THIS GIVEAWAY for the gently used print copy.


For 3 Extra Bonus entries comment on the review
OR on the Character Interview.

* This contest is open to U.S. address Only.
* This contest will close 10 PM (Central) on January 24, 2014.
The winner will be randomly selected from all entries.
WINNER WILL BE ANNOUNCED after January 24, 2014.
Winners will have 72 hours to respond by email or the winners form linked in the announcement.
Posted by Martha Eskuchen at 5:32 AM