This is another fun offering in this fantasy, action series.
Hammered: The Iron Druid Chronicles, Book 3
by Kevin Hearne
Narrated by Luke Daniels 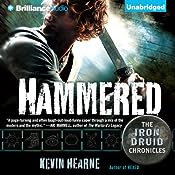 Publisher's Summary
Thor, the Norse god of thunder, is worse than a blowhard and a bully - he’s ruined countless lives and killed scores of innocents. After centuries, Viking vampire Leif Helgarson is ready to get his vengeance, and he’s asked his friend Atticus O’Sullivan, the last of the Druids, to help take down this Norse nightmare.

One survival strategy has worked for Atticus for more than two thousand years: stay away from the guy with the lightning bolts. But things are heating up in Atticus’s home base of Tempe, Arizona. There’s a vampire turf war brewing, and Russian demon hunters who call themselves the Hammers of God are running rampant.

Despite multiple warnings and portents of dire consequences, Atticus and Leif journey to the Norse plane of Asgard, where they team up with a werewolf, a sorcerer, and an army of frost giants for an epic showdown against vicious Valkyries, angry gods, and the hammer-wielding Thunder Thug himself.
Listen to Iron Druid Chronicles


Review:
This is another fun adventure with the Iron Druid, Atticus O’Sullivan. He gained a reputation from the prior installments when he killed the celtic god, Aenghus Óg. Now he has people, especially his friend, Viking vampire Leif Helgarson, wanting him to help take on the Norse god of thunder, Thor. Atticus may not like Thor but he has no inclination to take on this battle. Besides he has another quest to complete first. He accepted help from a friend in his last battle to protect the witches and he promised to procure a special apple of immortality. Atticus sneaks into the magical land of Asgaard and manages to steal the apple after killing a few legendary guardians in the process. Although he tries to blame the theft on Bacchus he ends up with enemies on his track.

Atticus prepares to leave his beloved Tempe and move to a new place.  Morrigan (goddess of death with whom he has a pact) and Jesus meet with Atticus to warn him that chasing down Thor will have unwanted consequences In spite of the warningsAtticus reluctantly agrees to help Leif in his fight. Leif brings along the leader of the local werewolf pack and three other unusual warriors. They prepare by bonding together with each warrior shareing his experience with the brutal, ruthless behavior of Thor who killed their friends or family.

The small band enlist, through a bit of Atticus trickery, the help of an army of frost giants and set out to face the Valkyries, Thor and his hordes. An epic battle of super-hero proportions ensues.

I really enjoy this series. Atticus is a two thousand year old druid who is full of wisdom and trickery, but also kindness. I like his unique friends, including his lovely apprentice, Granuaile, and his faithful wolfhound, Oberon. The plots include some real to life situations but also some almost outrageous characters and encounters. The adventure and action keep it faced paced and fun. I recommend stating at the beginning and enjoying them in sequence.

Audio Notes: Luke Daniels does a great job narrating this series. He adds to the characters and the excitement. This is a fun series to listen to.


I had this audiobook in my Audible library.
Posted by Martha Eskuchen at 5:28 PM