This starts as a bit of drama but becomes a surprising charmer.
Major Pettigrew's Last Stand: A Novel
By Helen Simonson
Narrated By Peter Altschuler 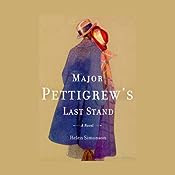 Publisher's Summary
You are about to travel to Edgecombe St. Mary, a small village in the English countryside filled with rolling hills, thatched cottages, and a cast of characters both hilariously original and as familiar as the members of your own family. Among them is Major Ernest Pettigrew (retired), the unlikely hero of Helen Simonson's wondrous debut. Wry, courtly, opinionated, and completely endearing, Major Pettigrew is one of the most indelible characters in contemporary fiction, and from the very first page of this remarkable novel he will steal your heart.

The Major leads a quiet life valuing the proper things that Englishmen have lived by for generations: honor, duty, decorum, and a properly brewed cup of tea. But then his brother's death sparks an unexpected friendship with Mrs. Jasmina Ali, the Pakistani shopkeeper from the village. Drawn together by their shared love of literature and the loss of their respective spouses, the Major and Mrs. Ali soon find their friendship blossoming into something more. But village society insists on embracing him as the quintessential local and her as the permanent foreigner. Can their relationship survive the risks one takes when pursuing happiness in the face of culture and tradition?
©2010 Helen Simonson (P)2010 Random House


Review:
Major Pettigrew is a retired English officer, living a quiet life as a widower in a small English village. He has settled into his routines, including maintaining some distance from the local women who would fuss over a well settled widower. Pettigrew is all that one thinks of in a proper, honorable, wry English gentleman. Life is pretty humdrum with the town struggling to remain cheerful and friendly as they cope with economic downturns and racial tensions.

Major Pettigrew gets a call that his younger brother has died unexpectedly and he finds himself in shock. He is upset when his ambitious son, Roger, claims he has an appointment but will try to make it to the funeral. Pettigrew is disturbed when Roger arrives late with a seemingly forward, young American woman.

Another serious issue strikes Pettigrew as he prepares to face his sister-in-law and her daughter at the funeral. When their father was dying he presented the boys with his treasured Churchill rifles. One was given to each with the verbal understanding that if anything happened to either brother the pair would be reunited and be held for the next generation. Pettigrew has always cherished the guns and tried to purchase the second gun from his brother a few times but was always refused. Although he is distressed at the loss of his brother he is anticipating reuniting the pair of guns until his son and his niece make it clear they want the pair sold for the highest price as quickly as possible.

While coping with the fog of grief Pettigrew finds a growing, gentle friendship with Mrs. Jasmina Ali, the widowed Pakistani shopkeeper. Mrs. Ali was actually born in England and has never been to Pakistan but she is clearly treated as a foreigner. Pettigrew begins to see that Mrs. Ali struggles with the restrictive expectations of her Pakistan in-laws as well as the prejudices that keep her set apart in the village. Pettigrew resents this on her behalf and begins to champion her situation.

When I started listening to this I wasn’t sure it was a book for me since I am not a big fan of family drama. However I am quite glad I pushed along because there is an irrepressible charm that infuses the Major and has the reader pulling for him and Jasmina to make things work out. The author manages to handle with dignity issues of family jealousies, and prejudice of race and age. She presents a charming story of older people falling in love and overcoming objections of family and outsiders.

There is warmth in description, a good flow and humor to the story. All little side currents are tied up nicely in the end. The story might not be for all readers but for those who enjoy a warm drama with life issues and humor, it should be a charming, enjoyable read or listen.

Audio Notes: I enjoyed the primary British accent that perfectly suited the story. Peter Altschuler did a good job of presenting the various accents of the characters, not only nationalities (British, Pakistani and American) but conveying consequence and position too. I delighted in his ability to insert snorts and chuckles as fitted in the story.


This book was from my Audible Library. I had purchased it because of the charming cover and because I had read several positive reviews on other blogs.
Posted by Martha Eskuchen at 5:59 PM