CREATING A STORY FROM A PIECE OF HISTORY

This is a most interesting topic for me – because this ‘piece’ comes with two distinct types of ‘history': - the Period and the Personal. 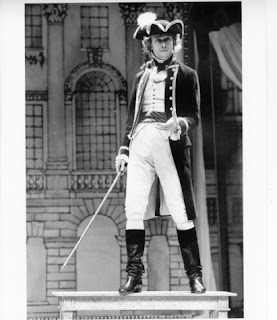 The latter first: The idea of writing ‘Jack Absolute’ came because I’d played the role of Jack Absolute in Sheridan’s 18th Century comedy, ‘The Rivals’ in 1987. Toured Britain with it for six months and ‘absolutely’ (sorry, that comes up a lot!) relished the part. Mourned him when the gig was over. But that was long before I became a novelist. 17 years later, I thought of being him again – by writing a novel based on him.
Yet what could he do? In the play he’s a roguish army officer, a bit of a scoundrel and a passionate lover – and I wanted to keep all that made him such fun to perform. But I also wanted to cater to many of my other passions (my writing tip: write what you totally love!). Such as, in no particular order: swordplay; theatre; beautiful women; beer; battles; spycraft. So then I looked into the history of what was going on at the time of the play’s first production -1775 – et voila! The American Revolutionary Wars. And once the principal conceit was established –that Sheridan stole the name and story of my hero, the real Jack Absolute – my course was set.
The piece of history I then set his story against is, of course, so exciting. The closet historian I am relishes the research, reading a ton and, as importantly, going to the places. I’d narrowed down the novel’s scope to the Saratoga campaign – plenty of drama in those six months to fill five books let alone one. So I was able to visit both the battlefield itself and a re-enactment of the fight, where I met and talked with experts in uniforms blue and red – and in wolfskins, because one of my main characters was Jack’s blood brother Ate, a Mohawk. (Native history, another passion!) 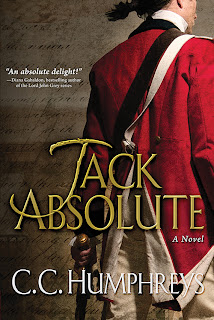 After that, it was back to my desk, to select from all that research, to narrow down both action and detail.
I love history - but I write novels; it’s the characters’ journeys that count most. Yes, a reader need to know some of the history to understand their choices from the macro of grand strategy to the micro of small sword play. But I try only to reveal facts through a character’s need to know it. Make it vital to them - and so us. No info dumps!
One of my favourite writing words is ‘oscillation’. I oscillate between the drive of the plot, the necessities of period detail and, especially, the wishes of my characters, set against both. It is challenging, unnerving and, often, sheer bloody fun! Especially in this case, when I got to both live my Jack again, and watch him grow in all sorts of new directions.
My wife says he is my fantasy alter ego. Maybe. He’s certainly a fun guy to spend time with – even when he cocks up big time. Perhaps especially then!


C.C. Humphreys is a novelist, fight choreographer, and actor who played Jack Absolute in The Rivals for a six-month run in London in the mid-1980s. When he became a full-time writer a decade ago, he decided to transform his leading man into a title character. Humphreys has written seven historical fiction novels including The French Executioner, which was runner-up for the CWA Steel Dagger for Thrillers 2002. The Jack Absolute series will feature three books: Jack Absolute, The Blooding of Jack Absolute, and Absolute Honour.

Please check out my review with ARC Giveaway to be posted midday on May 3.
Posted by Martha Eskuchen at 7:00 AM