Book Review: Her Own Devices: A Steampunk Adventure (Magnivient Devices) by Shelley Adina

I love this series! 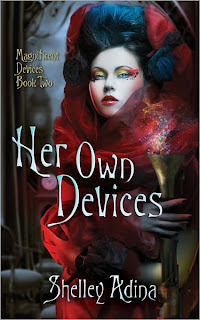 Seventeen-year-old Lady Claire Trevelyan, left alone after the Arabian Bubble financial disaster claims home and family, now leads the cleverest gang in the London underworld. Between outwitting a rival gang, inventing a device that will net her and her scientist employer worldwide fame, and keeping her mother from marrying her off, she can almost forget that a powerful lord wants to get closer ... and if he succeeds, can destroy it all with a single word ...


Review:
Book two picks up and continues the story of Lady Claire - once a young girl of seventeen who is was scheduled to make her curtsey to the Queen a few weeks before her father died and she ended up living on the streets. Now she has become a lady of resources, known as “The Lady of Devices” with a ‘flock’ of orphans as her chargers and helpers.

She has begun working with Andrew, a young scientist who is looking to create a better combustion engine. Andrew does the design experiments while Lord James, his partner and the money man, talk to railroad moguls who would be interested in buying the invention if proven.

Claire learns that the lightning rifle she took from a rival gang has a mechanism that was designed by another female scientist. Unfortunately the brilliant Dr. Craig was shunned by her peers and committed to Bedlam. Lady Claire sets out to visit the Doctor and, learning that she has been wrongfully ‘imprisoned’, arranges a break out with her clever crew.

Lord James coerces Claire to become his fiancé. She reluctantly agrees with the terms that it will be a four year engagement while she attends University and she will get her name on the Patent for the new engine. Claire figures the engagement will protect her place in society and keep her mother at bay. That is until Claire learns that Lord James has no intention of keeping to the terms Claire set. He has gone to her mother and arranged to marry her before she can gain her independence at 18.

Claire and Andrew grow closer as they incorporate Dr. Craig's device to their engine. But now Claire must flee London to stay away from James. A surprising visit brings a family reunion and new friends, Lord Dunsmuir and his wife Lady Davina, who offer Claire a way escape by not just any travel but a luxury airship, the Lady Lucy. They are even willing to bring along the children. As they make plans for their next adventure to Canada news comes in of theft and betrayal.

This is a lively, fun read. Lady Claire is wonderfully brave and resourceful and the children, plus chicken, add spunk and sass.  I am enjoying the storyline and ready for the adventure in Book 3.