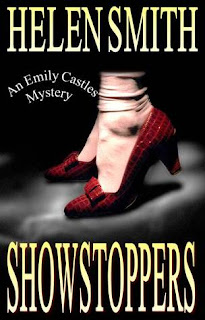 
Review:
We met Emily and some of her neighbors in the first book, Three Sisters. Now one of the neighbors, Victoria, seeks Emily’s help to uncover a blackmailer. Victoria operates Showstoppers, a dance studio for children. Victoria was an actress in her youth and there is apparently a bit of a scandalous video  with a former beau from her college days. The man, a now famous and handsome actor, has appeared recently to enroll his daughter in the dance studio.

Victoria’s husband is some type of civil servant and there could be embarrassment from revealing the video. The VHS tape isn’t quite what you might expect and soon most of the employee’s at Showstoppers know about the tape. Emily notes a little tension between Victoria and her manager and there is a lot of crazy busyness as the year-end program takes place.

Emily is very likeable and her relationship with Dr. Muriel is developed more in this second story as they look at the clues together. Again, there are initially several suspects before the truth is, rather shockingly, revealed.  This is a fast, fun read with an extra touch of irony at the ending.


Emily followed Victoria into the lovely kitchen where the family ate most of their meals. Everything was just so, in a country-living kind of a way; there was an Aga and a conventional oven; cupboards and units painted in forget-me-not blue; French windows opening onto the garden at the back; big wooden storage boxes for the boys’ wellington boots and trainers; and something deliciously Italian-smelling (herbs and tomatoes and cheese in it or on it for sure, Emily thought) cooling in the oven.  Location 31.

Dr. Muriel makes a distinction on how to approach the suspect:


A denouncement is public and upsetting. A confrontation is by invitation only and most satisfying. Location 818.

I received this ebook for an honest review during Bookblast tour.

Three Sisters and Showstoppers are two novella-length stories in the Emily Castles mystery series. The first full-length novel, Invitation to Die, will be published by Thomas & Mercer in October 2013.

The Emily Castles mystery series is set in present-day London. It features twenty-six-year-old Londoner Emily Castles and her neighbor, eccentric philosophy professor Dr. Muriel Crowther. In Three Sisters, Emily goes to a party in a big house at the end of her street. She's sure she witnesses a murder, but no one will believe her. She teams up with Dr. Muriel to investigate.

In Showstoppers, Emily helps out at a local stage school run by her neighbor, Victoria. Soon she's mixed up in a blackmail plot and two deaths. Emily and Dr. Muriel team up to prevent further a massacre live on stage during the end of term show.

Helen Smith is a novelist and playwright who lives in London. She's the author of bestselling cult novels Alison Wonderland, Being Light and The Miracle Inspector as well as the Emily Castles Mystery Series.

Posted by Martha Eskuchen at 5:01 AM