Book Review and Feature: A New Birth of Freedom: The Translator

This is an entertaining and fascinating blend of history and time travel fiction.

A New Birth of Freedom The Translator
by Robert G. Pielke 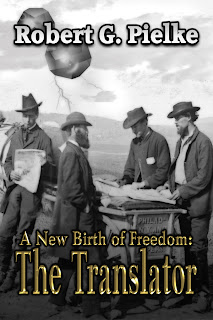 
Book Description
Publication Date: November 1, 2012
THIS IS BOOK TWO OF THE TRILOGY:


Review:
This is book two of a trilogy and I recommend reading the first book, A New Birth of Freedom: The Visitor, so you have the full background. Book one introduces Edwin Blair as a history professor in the 23rd century whose world has been annihilated by alien invaders.  Blair, with the help of scientists, manages to get one of the creature’s time travel devices working. He has traveled back in time to meet President Lincoln with plans to kill the brutal "Pests" before they can destroy his world.

Book two picks up several weeks after Blair has interrupted events at Gettysburg.  Fourteen of the “Pests” are prisoners while another 50 remain locked in their vehicles.  John Hay has been assigned to journal Blair’s actions and interactions with the Pests. Hay and the journals will also help Blair as his memory becomes more and more unreliable as he stays in the past and possibly impacts history.

Blair and Hay are part of the daily morning meetings with President Lincoln, his Secretary of War Edwin Stanton, Congressman Elihu Washburne, and bodyguard Allen Pinkerton. Lincoln sorts and deals with couriered news as the men discuss the war events and public sentiments. Blair and Hay give daily reports regarding the efforts of communicating with the Pests. Initial efforts were with the aid of Joseph Pierce using sign language and then morse code. Finally the expected ‘translator’ and Apache expert, William Philo Clark, and an accompanying Indian, Goyahkla, arrive to help in a surprising way.

This book gives a wonderful view of Lincoln as he shares stories as means of imparting wisdom. He also shifts easily into lawyer interrogation mode. The other men are also brought to life through glimpses of their personalities. Real events of the Civil War are incorporated but many are twisted in the alternate history, such as General Lee’s letter of resignation being depicted as part of his retiring from the war after Gettysburg.

Blair begins to experience headaches, light flashes and memory loss. He realizes he is walking a tight line as he wants to change the past enough to stop the future destruction by the Pests but he can’t change too much or he might not even exist to return. This is not an action story but one of interesting characters, small mysteries requiring logic and deductive reasoning, and ponderings on issues of humanity as well as difficulties of time travel. Mr. Pielke does a good job of exploring the many paradox and contradictions that could result from time travel to the past.

I experienced some confusion as the backstory is filled in all the way through rather than at the beginning of the book. It might be easier to read the books closer than two years apart as I did and reading this second book without reading the first would not give a full picture of the dilemma that develops for Blair.  I really enjoy the historical aspects of this series and the time travel dilemmas. The ending is another cliffhanger that has you waiting for the last book to complete the adventure. I recommend this to those who enjoy Civil War history and time travel issues.


I received a digital galley of this book for an honest review as part of a Tribute Book Tour.

Check the full tour schedule for other reviews and Giveaway opportunities! 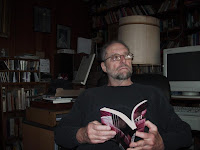 
Robert Pielke, a native of Baltimore, Maryland, now lives in Claremont, California. He earned a B.A. in History at the University of Maryland, an M. Div. in Systematic Theology at the Lutheran Theological Seminary at Gettysburg, and a Ph.D. in Social Ethics from the Claremont Graduate School.

He taught on ground and online for countless years at George Mason University in Virginia, El Camino College in California and online for the University of Phoenix. Now happily retired from “the job,” he is doing what he always wanted to do since he wrote his first novel at ten in elementary school. It was one paragraph, three pages long and, although he didn’t know it at the time, it was alternate history.

His academic writings have been in the area of ethics, including a boring academic treatise called Critiquing Moral Arguments, logic, and popular culture. Included in the latter is an analysis of rock music entitled You Say You Want a Revolution: Rock Music in American Culture. He has also published short stories, feature articles, film and restaurant reviews. His novels include a savagely satirical novel on America and its foibles, proclivities and propensities, Hitler the Cat Goes West, and an alternate history, science fiction novel, The Mission.

Most recently, he has updated and revised his book on rock music, which is being republished by McFarland & Co.

He swims daily, skis occasionally, cooks as an avocation, watches innumerable movies, collects rock and roll concert films, is an avid devotee of Maryland crabs and maintains a rarely visited blog filled with his social and political ravings. His favorite film is the original Hairspray; his favorite song is “A Day in the Life”; his favorite pizza is from the original Ledo Restaurant in College Park, MD; and he is a firm believer in the efficacy of “sex, drugs and rock and roll.” Somehow his family and friends put up with him.