Audible Book Review: Marked in Flesh, The Others, Book 4 by Anne Bishop

This is another engaging story in this good series.
Marked in Flesh
A Novel of the Others, Book 4
By: Anne Bishop
Narrated by: Alexandra Harris 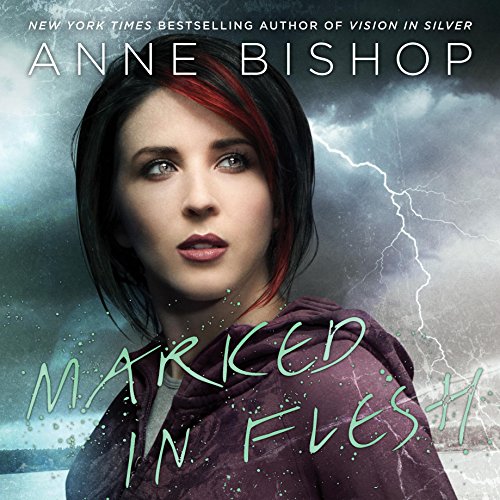 
Publisher's Summary
Fourth in the "flawless" (The Reading Café) New York Times best-selling series from the author of Vision in Silver.
For centuries, the Others and humans have lived side by side in uneasy peace. But when humankind oversteps its bounds, the Others will have to decide how much humanity they're willing to tolerate - both within themselves and within their community....
Since the Others allied themselves with the cassandra sangue, the fragile yet powerful human blood prophets who were being exploited by their own kind, the delicate dynamic between humans and Others changed. Some, like Simon Wolfgard, wolf shifter and leader of the Lakeside Courtyard, and blood prophet Meg Corbyn see the new closer companionship as beneficial - both personally and practically.
But not everyone is convinced. A group of radical humans is seeking to usurp land through a series of violent attacks on the Others. What they don't realize is that there are older and more dangerous forces than shifters and vampires protecting the land that belongs to the Others - and those forces are willing to do whatever is necessary to protect what is theirs....
©2016 Anne Bishop (P)2016 Penguin Audio

Review:
Meg Corbyn is a cassandra sangue, a young woman who was trained to cut herself to bring forth prophesies. She managed to escape her handlers and stumbled into the Lakeside Courtyard. She was given shelter and a job by the community leader, Simon Wolfgard, a wolf shifter. The local shifters and elementals (the Others), like Meg and her ‘human’ presence has brought a favorable situation for other humans in the town.

There has been a power-hungry group of humans who want the land and control that have been kept from them by the Others. They have stirred up public sentiment dividing the humans between those who will live peacefully with the Others and those who want to boycott and harm the Others. The radical, hateful humans conspire to attack the Others not realizing the hidden forces that will be impacted and angered. The elementals and hidden forces have to decide ‘how much humanity they are willing to tolerate’. This has several meanings but the most dangerous will be the response triggered when the humans poison the sharks in the ocean and slaughter a pack of wolf shifters as a show of force.

Running in the background of the conflict between the humans and Others, Meg and other cassandra sangue are looking for a way to produce their prophesies without cutting themselves. Sometimes the prophesies are unclear and can be misinterpreted. The young women are finding ways to communicate with each other, as one is drawing images. Meg, with local human friends, realizes that she (as the recognized pathfinder) may be able to develop cards, similar to a tarot deck, for use by herself and others. This developing modification is needed to protect the young women and I like how it is changing through the books.

I enjoy the positive relationship between the Others and the humans in Lakeside Courtyard and the handful of other communities that are cooperative. The racism and hate of the radical group is horrendous. The story has good suspense that kept me interested and engaged. I highly recommend this book in the series. I do recommend reading the series in order to get a clear picture of the nature of the Others, elementals, and the variety of humans.

Audio Notes: Alexandra Harris continues to do a wonderful job on the narration. The voices and characters are clear and distinct. She conveys the emotions of the characters. The audio experience adds to my enjoyment of the story.