This story kept me up when I should have been sleeping. 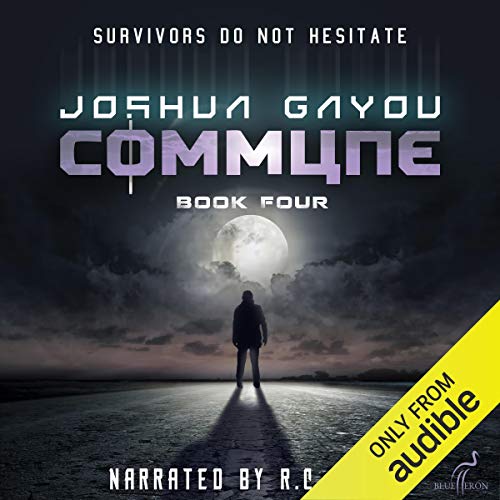 
Publisher's Summary
The philosopher asks: "Faced with the mutually exclusive choice between moral principle and the survival of your family, which is the correct path?"
Philosophers love to pose such questions, and in the day-to-day struggle, such thinkers rarely attain to a level of relevance rivaling that of the simple hunger pang. Their careful considerations dissipate under the leveled gun.
We do not feel their disapproving gaze when The Others draw near.
When the world sends doom, the survivors do not hesitate.
The survivors do what is necessary.
©2018 Joshua Gayou and Blue Heron Audio (P)2019 Joshua Gayou and Blue Heron Audio

Review:
Although Brian, a member of the Jackson Commune, continues his character interviews in this episode, there is much more action. The military group that visited and helped the Commune has moved on. The Commune has set aside enough reserves to survive the winter and do the spring planting. Life has settled into normal work routine as the Commune looks forward.

Beyond the state, there is a group of misfits that has grown to a large community. They are under the leadership of Clay who struggles to maintain loyalties and control as the group grows and factions form. Some of the factions are more brutal and devious than others. Ronny, Clay’s second in command, had a bad encounter with Jake’s team and knows that they have a “home base” near Jackson. He is intent on moving the group to Jackson and finally convinces Clay to move on as the food stores are becoming scarce.

The Commune occupants quickly learn that a large group has moved into Jackson. It is very unclear if the group is friendly or intend harm. Gibbs and a few other leaders go to the edge of town to meet and attempt to find out the intentions of Clay’s group. They step back in order to regroup.

Jake instructs the Commune members to begin to prepare for an attack. They do not have enough food and resources to share, and they must protect the new home they have established.

There is still a misguided member of the Commune who thinks it will be possible to negotiate a fair exchange of information and resources. He sneaks off to town starting a stream of violent events.

This particular book has a lot of brutality and, unfortunately, a lot of foul language. The language is a bit distracting to me, but I was able to push through because I like the characters and the action. I truly did stay up too late into the night listening. I recommend the series to those who like rough post-apocalyptic survival and don’t mind rough language.

Audio Notes: R.C. Bray continues to deliver wonderful narration. Bray provides clear and distinct voices. As before in this series, I was engaged and my enjoyment of the story was enhanced by the narration.