Audible Book Review: After It Happened by Devon C. Ford

I enjoyed this post-apocalyptic (plague) story. 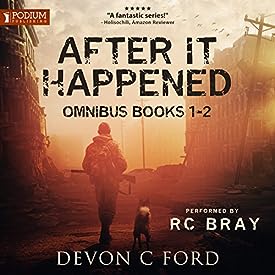 Publisher's Summary
This omnibus edition contains Survival (book 1) and Humanity (book 2) of the After It Happened series.
Survival, book 1:
Set in the UK in the immediate aftermath of a mysterious illness which swept the country and left millions dead, the series follows the trials facing a reluctant hero, Dan, and the group he forms around him. They must battle the elements, find sufficient supplies and equipment to survive, and protect themselves against the most destructive force on the planet: other people.
Banding together those he found along the way, he has to fight to keep them safe.
To keep them alive. To survive.
Humanity, book 2:
The survivors have established a home, but they still have to face the brutality of human nature.
Not only do they have to survive, they must keep their humanity.
©2017 Devon C. Ford (P)2017 Podium Publishing


Review:
Dan is a man with a military and/or law enforcement background. He tends to be a loner but when society is decimated by a plague, Dan finds it hard not to try to help the rare people he finds wandering the streets or stores. The first person he meets is Neil who is unimpressive in size and fitness but has his own set of survivalist skills. One becomes two and they travel along until two become four and more.

As the small group builds they realize they need to find a place they can defend and rebuild. Each new member is assigned to a task group: gardening, cooking, cleaning, scavenging, military, etc. Not every person is prepared to contribute their share of work and some might become disgruntled. Can Dan and the other leaders keep the group safe and provide for all needs?

There are other groups forming who are more interested in taking then building. And somewhere underground is a bunker of politicians expecting to emerge to take control. It is a dangerous time for survival.

I liked how this opened, capturing my interest, and holding it all the way through. I like Dan as a taciturn loner who becomes the quiet fierce protector of the slowly growing community. Another primary and interesting character is a ten-year-old Leah who becomes Dan’s shadow protégé. This has a good combination of survival and society rebuilding issues, defensive actions (with weapons explained), and a touch of romance. I will definitely be getting the next bundle (books 3 and 4) in the series soon. I recommend this to readers who enjoy the post-apocalyptic genre.

Audio Notes: R.C. Bray is an excellent narrator in this and other sci-fi genres. He brings the various characters to life and helps the listener become immersed in the story. I love listening to Bray and he adds to this story.