This is a nice children’s story with a good message.
You Don't Belong Here
by Sean O'Toole 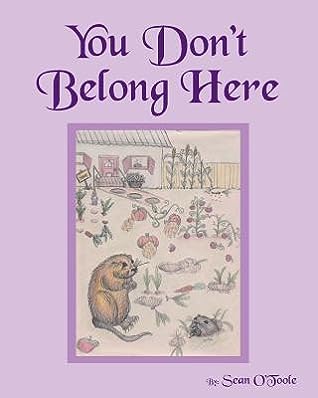 Two muskrat brothers become displaced due to a storm and end up in a lady’s backyard. They make a big mess back there, and the lady decides it’s time for them to go. She calls a pest control company who comes and sets traps to catch them. He catches one of the muskrats and relocates him in a forest near a pond. He and his brother had never been apart before, and now he was all alone in an unfamiliar place. Some other animals approached him while he was drinking from the pond. They had never seen a muskrat before and were not as welcoming as he would have liked—until the muskrat proved himself worthy of living there by helping the animals defeat a dangerous foe. The other animals realized that he had some unique qualities and skills and did in fact belong at the pond, and they became friends. And someone special may have rejoined the muskrat to make for a happy ending.


Review:
Marty and Manny are muskrat brothers who get displaced by a flood. They end up at a neighborhood yard where the homeowner finds them cute until they start ravishing her garden. She announces, “you don’t belong here” and calls the pest control who captures Marty and releases him far away.

Marty is initially rejected by the other creatures he finds at the wood pond. But then he steps up to help them face a bully that has been harassing them.

Can Marty find a place to belong? Will Marty and Manny get to be together again?

I really enjoyed this sweet story and the message it brings about finding a place to belong and fighting together to face a bully. The illustrations are what I would call colorized pencil sketches. They are not formal or precise but rather charming in their simple, more amateurish tone. I think this would be enjoyed by young children to be read to or to read when they are able. I would share this with my grandchildren ages 3 through 8. I recommend this as a cute book with a good message.


Source: 2019 NetGalley. This qualifies for my 2019NetGalley and Alphabet goals.
Posted by Martha Eskuchen at 8:05 PM