A little slow start and then I was engrossed. 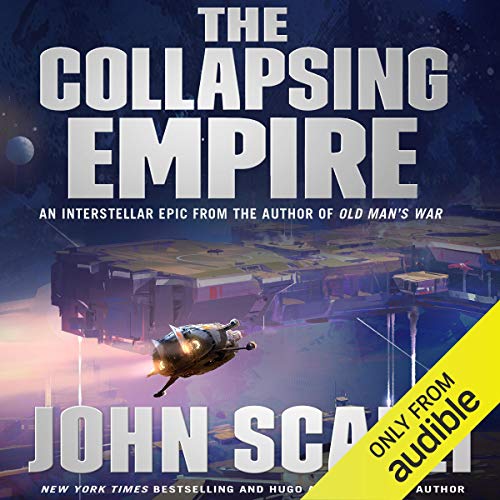 Publisher's Summary
2018 Locus Award, Best Science Fiction Novel
Our universe is ruled by physics, and faster-than-light travel is not possible - until the discovery of The Flow, an extradimensional field we can access at certain points in space-time that transports us to other worlds, around other stars.
Humanity flows away from Earth, into space, and in time forgets our home world and creates a new empire, the Interdependency, whose ethos requires that no one human outpost can survive without the others. It's a hedge against interstellar war - and a system of control for the rulers of the empire.
The Flow is eternal - but it is not static. Just as a river changes course, The Flow changes as well, cutting off worlds from the rest of humanity. When it's discovered that The Flow is moving, possibly cutting off all human worlds from faster-than-light travel forever, three individuals - a scientist, a starship captain, and the empress of the Interdependency - are in a race against time to discover what, if anything, can be salvaged from an interstellar empire on the brink of collapse.
©2017 John Scalzi (P)2017 Audible, Inc.


Review:
The Interdependency is a universe of human occupied worlds, planets and outposts, which are connected by The Flow. The Flow is an extradimensional field which allows travel through space so the worlds can trade together. As in any empire, there are social layers (workers, teachers, scientists), some struggling, some succeeded. And there are ‘elite’ houses competing for power. On the ruling planet, the Hub, a brand-new Emperox, Cardenia, is struggling to learn how to handle her unexpected role which includes balancing the governing council, the mercantile guilds, the spiritual arm and the other interests which are the concern of the ultimate ruler.

A starship captain, after surviving an ill-timed mutiny, arrives at the farthest planet, End, to learn that the Duke, currently in charge but involved in rebel war, wants to quarantine their cargo. Now the captain and the owner’s rep, Lady Kiva, need to figure out how to bring back a profitable return. As the rebellion rages it looks like they might be able to sell passage to people who want to leave the planet.

Meanwhile, there is a family on another section of End where a friend of the prior emperor has been engrossed in quietly studding The Flow. Father and son physicists have determined that The Flow is soon going to collapse. Lord Marce hopes to get his son and the important research on the last starship that will be able to leave End. This information will change the Interdependency and some of the powers on End don’t want the information to get to the Hub.

The lives of these three primary characters become intertwined as the universe begins its drastic change. The story started a little slowly, but I did become involved in personalities and the political plot. I enjoyed the humor and intrigue but was just disappointed by the bad language. The book ends at a point that leaves open a lot for the next struggles. I will finish the Old Man Series while I think if I want to continue this series. I can recommend this to readers who like intergalactic politics and don’t mind the language.

Audio Notes: Wil Wheaton does a nice job with the narration. He provides distinct voices and strong energy. The narration made this a better ‘reading’ experience for me.