#NetGalley Book Review: The Ethereal Squadron: A Wartime Fantasy (The Sorcerers of Verdun)

I totally enjoyed this alternate history military fantasy.
The Ethereal Squadron: A Wartime Fantasy (The Sorcerers of Verdun)
by Shami Stovall 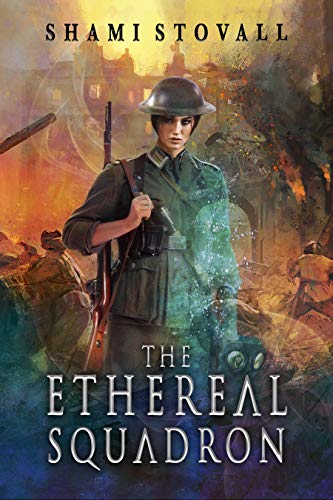 SOLDIERS, SORCERERS, AND MONSTERS...THIS IS WORLD WAR ONE LIKE YOU’VE NEVER IMAGINED IT.
It’s 1916, and the world is on fire.
The Great War has already consumed much of the globe, but a second, secret war between sorcerers threatens to crack it in two. The ruling families of Germany and Austria-Hungary, those with the chill of magic in their blood, will stop at nothing in their quest for power, and they’ve drawn the entire world into a bloody war because of it.
But Florence Cavell—codename Geist—means to stop them. She had to defy her family, cut her hair, and disguise herself as a man to join the legendary Ethereal Squadron: a joint US-UK division of the allied powers’ mightiest sorcerers. Armed with her powerful specter sorcery, which allows her to “ghost” through bullets and barbed wire alike, Geist fights a tireless battle to end the war once and for all.
But then the Germans unleash the Grave-Maker Gas, a concoction so deadly it destroys everything it touches and transforms even the strongest sorcerers into terrible monsters. Even her ghostly magic can’t resist the gas’s corrosive power, and it costs Geist everything she loves—her team, her friends, even the use of an arm.
This is the new weapon that could end the war—and give the Germans the world.
Now Geist must risk it all to lead a new team deep into hostile territory to discover the source of this terrifying new technology before the enemy sets it loose upon the world. Will she be able to stop the Grave-Maker Gas before it’s too late...or will the secrets of her past finally catch up with her?


Review:
Florence Cavell has special specter sorcery skills that come in handy by allowing her to “ghost” through bullets, barbed wire and more. This gained her the code name ”Geist”. All of her Ethereal team mates are named after their powers, and each one has a special skill that helps them succeed as a team. Geist returns from a devastating battle where she learned of a horrendous new weapon in use by the Germans and lost members of her team to the corrosive, skin eating gas.

At first it is hard for even her superior to believe and understand the horror of the Grave-Maker Gas. It is crucial to find a way to combat or stop the gas. She is assigned to lead her new team, including a mysterious man she rescued from the German dungeon, to go behind enemy lines to get more information. Every step they take puts them in danger and challenges their skills. And soon they are facing monster soldiers created through experimentation with blood stolen from other sorcerers.

Initially only one person at the base knows Geist’s true nature but the closer she grows with the team the harder it is to hide not only her sex but also her family background. She is afraid everyone will reject her leadership, if not condemn her, when they discover her secrets.

I very much liked Geist’s character. She is loyal, brave, determined and caring, in addition to being a skilled warrior. Her newest team member, Vergess (Vergessenheit or Oblivion), discovers her secret and it becomes clear that he plans to try to protect her whenever he can. He has secrets of his own and I really liked his strengths and his gentlemanly attitude toward Geist. The team has to work through suspicion and tension while trying to stay alive.

The characters are well defined with their histories shared as the danger ramps up. The story is set in an alternative wartime 1916 Europe. It is creative and action-packed. I was pulled in by the opening action and remained engrossed as the suspense and the emotional and interesting interactions continued. I sort of wish there would be more stories with these characters.  I recommend this to readers who enjoy a strong alternative military fantasy.


Source: 2019 NetGalley. This qualifies for 2019NetGalley goal.
Posted by Martha Eskuchen at 9:52 PM