This action packed Urban Fantasy is full of strong characters. 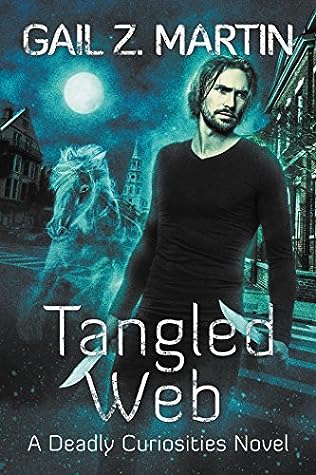 Cassidy Kincaide runs Trifles & Folly in modern-day Charleston, an antiques and curios shop with a dangerous secret. Cassidy can read the history of objects by touching them and along with her business partners Teag, who has Weaver magic and Sorren, a 600-year-old vampire, they get rid of cursed objects and keep Charleston and the world safe from supernatural threats.
When zombies rise in Charleston cemeteries, dead men fall from the sky, and the whole city succumbs to the “grouch flu,” Cassidy, Teag, and Sorren suspect a vengeful dark witch who is gunning for Teag and planning to unleash an ancient horror. Cassidy, Teag, and Sorren—and all their supernatural allies—will need magic, cunning, and the help of a Viking demi-goddess to survive the battle with a malicious Weaver-witch and an ancient Norse warlock to keep Charleston—and the whole East Coast—from becoming the prey of the Master of the Hunt.


Review:
Cassidy can read history by touching objects. She is part of a group of friends who protect Charleston from supernatural threats. Her gentle business partner, Teag, uses Weaver magic to create fabrics that heal and protect. His personal partner is a local police officer who is aware of the magical world but tries to operate without making the magic known to the public. Sorren is the senior business partner as a 600-year-old vampire who has years of knowledge and connections in the supernatural realm.

Charleston is experiencing an unprecedented rise in supernatural activities. Cassidy and friends are already looking into a ghostly horse hunt going on with the alarming sound of galloping horses and baying dogs. Then they are asked to investigate when several hunting horses go missing by vanishing at the local horse hunting stable. Cassidy and Teag are soon dodging zombies from the cemetery and working around citizens with a “grouch flu”. Next Cassidy suffers a firsthand attack and her friends, plus a master weaver and local witch, gather to face the dark threat.

Clues lead to an angry weaver-witch who is seeking to raise a powerful Norse warlock so she can take revenge against those who have hurt her – particularly some in the horse community. It will take all the resources Cassidy and friends can pull together, including some from Sorren’s past, in order to prevail in this magical battle.

I enjoyed the fast action of the story. This is the first story I have read in the series, so it took me a little bit to sort through the many characters. Cassidy and her friends are well developed characters. None are presented as ‘superheroes’ on their own but they make a formidable team. The plot is well written with twists and turns to pursue to uncover the source of the evil and locate the hidden villains. I recommend this book to readers who enjoy fast-paced Urban Fantasy.


Source: NetGalley 2019. This qualifies for 2019NetGalley goal.
Posted by Martha Eskuchen at 5:30 AM